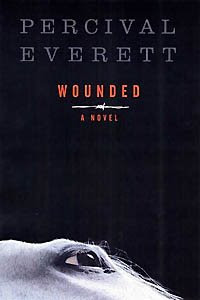 I just finished reading Percival Everett's Wounded last night.  Wounded is the story of John Hunt, a black horse trainer in a small town with a particular talent for training even the most difficult animals.  Hunt has no real trouble with animals, whether it's horses, donkeys or coyotes, but when it comes to people (himself included), Hunt doesn't have the same facility.  He just can't find a way to heal the old hurts.  When a gay man is murdered in town, followed by racist messages and slaughtered cattle on the nearby reservation, everyone begins to fear some sort of neo-Nazi hate group has moved into town.  The fears and difficulties are compounded by the arrival of David, the gay son of one of Hunt's friends.  Hunt sets out to try to fix everything: racism, homophobia, the hurts of his own past, the loss of loved ones, but finds himself up against the implacable realities of human nature, bigotry and death.

I enjoyed this novel a great deal.  I can never figure out why Everett's novels aren't more widely available.  The big Box Stores don't even stock them, but they are intelligent, compelling, funny and deep, as well as entertaining.  He's one of my favorite authors for sure.  It just shows the fact that good books often go unremarked, while awful pieces of trash soar to the top of the bestseller lists.  Everett's writing balances enormous themes with a deft facility for words, plot and character, while revealing a wise knowledge of the world and a healthy sense of humor.

The ending of the novel hit me like a pillowcase full of bricks, but that didn't alter my enjoyment.  I've found myself reflecting on the novel and its themes several times since finishing it.  That's the sign of a great book.
Posted by Matt Mikalatos at 8:49 AM