They're taking the hobbits to Isengard

I'm not dead. Just busy.
Posted by Matt Mikalatos at 8:15 PM No comments:

In which I experience racism first hand from the people of Colorado.

Yesterday I was sitting at a bus stop in Fort Collins, Colorado, minding my own business, when a white SUV full of young white men slowed on the street in front of me and they all started shouting things like, "Hey, vato!" and various other barely-Spanish phrases in not-very-good accents.

I happened to be on the phone, and didn't want to interrupt my call by shouting obscenities in Spanish (obscenities being one of the few things I actually know how to shout in Spanish, in addition to MAS TACOS POR FAVOR). My Spanish is not very good.

Anyway, I didn't think anything of it, really, except that the boys actually returned, slowed down again and started shouting in Bad Spanish and yelling racial slurs. Again, I was on the phone, and it was probably good, because I have a long history of not keeping my mouth shut and it's likely that I would have shouted something that would have either shamed or enraged them, and then they would have had to stop the car to try to beat me up.

It really is a shame that this sort of casual racism still exists, and being caught up in it even for a minute made me think of my Hispanic and Latino friends who often catch this sort of thing. It saddens me (but doesn't surprise me) that college kids today are still working through this.

Also, if they had started a fight with me they would have discovered that I'm actually Greek and I would have had to punch them in the head with my special punch I like to call "The Archimedes Screw Punch." That would have been too bad for them.
Posted by Matt Mikalatos at 10:11 AM No comments:

Superman and the Man of Steel

There's a recent film about Superman that's embarrassed to use the name. They're embarrassed, perhaps, because they want to make this new iteration of Superman "realistic" or "naturalistic" and let's be honest, in the 21st century the name "Superman" seems a little silly. 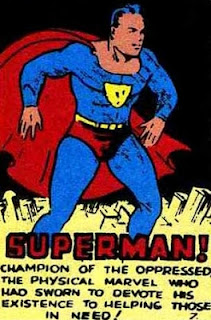 Maybe that's because two kids in their twenties invented him in the 1930's. For them, Superman represented the pinnacle of human possibility. He couldn't fly, but he could just jump over buildings. He didn't have heat ray vision, but he could outrun a train. And at first, he didn't fight space monsters and giant super-intelligent apes or robots or other Kryptonians. He protected the oppressed. He fought against real-world injustice: fat cats like Lex Luthor who took advantage of common citizens, or Borden Mosley (a corrupt financier) or Calvin Denby (a crook and sort of home-grown terrorist). He wasn't an ordinary man, he was the super man: the best human being possible.

Superman didn't kill people -- even the worst villains. He brought them to justice. 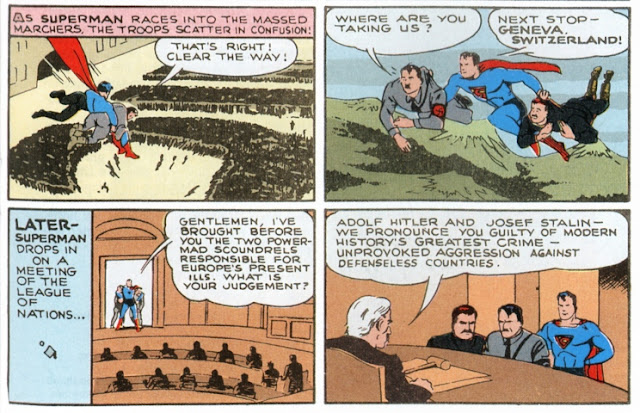 Frankly, there is a large dose of wish fulfillment involved in his stories. "What if I had the power to stop evil? What if I could make sure that no one ever died... not in an accident, not from a criminal, because I had the power to stop it?" And of course, Superman is rewarded for his goodness. He always gets the girl, even when he humbly tries not to be rewarded for just doing what he would do anyway.

Here's where the philosophical underpinnings of Man of Steel bothered and disappointed me. Superman should be the best possible human being, but in this movie he wasn't. Superman should always be able to find a way out: the higher ground, the best solution. But the Man of Steel couldn't. Because he is, after all, only a man, not a role model.


In the movie (vague, general spoilers in this paragraph only), he can't stop the villains from roughing up his mother. He lets entire skyscrapers full of people collapse, in a creepy 9-11 type catastrophic event caused by a fistfight with another Kryptonian. And eventually he uses his great power to pass judgment on the evil doers. Not to bring them to justice, not to give them due process, not to incarcerate or prevent them from doing evil. Superman abuses his power. He takes a moral path that doesn't reflect the best possibilities of humanity: it doesn't suggest hope, or forgiveness, or redemption or even justice. It represents vigilantism and pragmatism. It's Superman shrugging and saying, "I guess this is the best any of us can hope for."

That's why, although I enjoyed the movie, I walked out knowing it was not a movie about Superman. It was a movie about someone else, dressed up as Superman to make sure the movie made a profit. The "real" Superman -- the one who sets the world an example, the one we should aspire to be -- doesn't let entire buildings full of people die because he's in a fistfight. He's the sort of man who makes sure that kittens get rescued from trees. He stops purse thieves. He shows up at hospitals to talk to sick kids.

The fact is, the filmmakers wanted to make a "realistic" Superman, which they took to mean a world with no clear cut solutions, no easy way out. They made it gray and edgy and violent. That's fine. There are large parts of our world like that. But in the grey of this real world, the blue and red and yellow of Superman's costume should shine out that much brighter. He should use his power for good, to make the world a better place. Because even in this "real world" there are people who are working hard to bring peace and hope and light into the darkness. Superman should not only be one of those people, he should be a shining example of that fight, someone to look up to, someone to emulate. 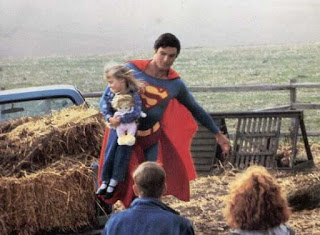 If my kids grew up to make the moral choices of the "Man of Steel" version of Superman, I would be disappointed. That's a shame. He should be better than that. There's no such thing as a no-win situation for Superman, because Superman believes "there's always a way." I don't care if he has to break the laws of physics and zip around the earth until it goes backwards and turns time around, Superman always wins, always protects, always provides hope, always does the right thing.

I still love Superman. I'm used to people not understanding him, or not believing he could exist. Unfortunately, that's what happened in this movie... someone said, "There's no such thing as a person with that strong of a moral code." There's no such thing as Superman, in other words. You can believe in science fiction and life on other worlds and that a man can fly, but not that human beings have a chance of becoming something better than what we are, that the "pinnacle of humanity" might make better moral choices than we are right now.

But I do believe. We can do better, become better. I believe that, at least in part, because growing up someone introduced me to a guy in blue tights and a red cape who told me I should believe that. There's always a way. We can fight for truth, because truth matters. We can fight for justice, because the right thing to do with our power is to protect those who have less power than us. We can, without embarrassment, fight for the American way, if what we mean by that is that all human beings have been endowed by their Creator with certain unalienable rights: among which are life, liberty and the pursuit of happiness.

At least, that's what Superman taught me. And, if these are my choices, then I prefer the "real" Superman to the "realistic" one.

Posted by Matt Mikalatos at 9:03 AM No comments:

I'm pretty sure this is the cutest turtle of all time

Ta-da!
Posted by Matt Mikalatos at 8:20 AM No comments:

This is so awesome: instant ice!

Maybe it's because I grew up in California instead of Minnesota, but I've never seen anything like this.

More Wonderful Wednesday.
Posted by Matt Mikalatos at 8:15 AM No comments:

Story and the Gospel

I'm on the road (again).  And I insist that the world keep turning my way.

I thought you might enjoy this video I made for some summer missions training a few weeks ago. It's a brief introduction to using story theory for explaining the gospel. I'd love to hear your thoughts or questions after you watch it.

Posted by Matt Mikalatos at 8:05 AM No comments:

On the Road Today 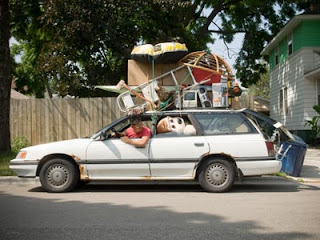 I don't want you to be lonely, though, especially because I've been neglecting the blog lately!

I've completely neglected to keep you updated on the new StoryMen podcasts. Check out the travel episode, in which I talk about my first experience with a bathroom on a train in Asia, and then be sure to listen to StoryMen: Into Darkness, in which the boys and I boldly go where lots of people have gone before, talking about the Star Trek universe and the most recent movie.

Or, if you'd like that sensation of cross-country travel without needing to get off your chair, you can follow my travel exploits on Twitter.
Posted by Matt Mikalatos at 5:56 AM No comments:

Best part? Kirk and the Gorn's duet, hands down.

You probably remember Rhett and Link, the genius masterminds behind this, for their Taco Bell Drive Through Song.

Via Clay
Posted by Matt Mikalatos at 9:42 PM No comments: