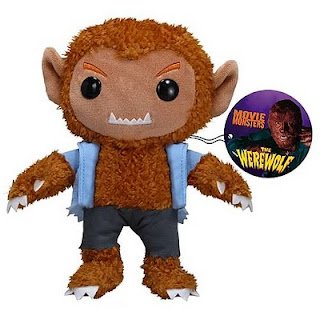 I've had several of you pestering me for information about the next book, so here's a bit of an update:

1) The main manuscript is done.... I'm working on another draft right now, which is due to my beloved publisher on the 15th of January.  It's shaping up nicely, I think, and my courageous editor will find that her helpful comments have been completely heeded.

2) We're working on a lot of fun extras for the book, some of which will be in the print edition and some in the e-book.  More details to come.

3) The central character in the book is a Lutheran werewolf named Luther Martin.

4) There's this possibility that we might change the title of the book.  I've been busily coming up with hundreds upon thousands of possible ideas for the new title, which eventually devolved into sad little riffs on regular book titles (like "Werewolf Shrugged").  But there are some good ones out there.  There's a possibility that we'll have a little voting session here on your favorites in the weeks to come.  Sounds like we'll have a solid title and cover by the end of February, which is fun.  I think getting the cover done is one of my favorite parts of the process.

We've loaded up the gang and we're off to the San Diego winter conference, where I'll be speaking, along with Dr. James A. White of Christ Our King Community Church.  My friend Charlie Schaller is rumored to be showing up to do his production of The Bema and I'm hoping the fantastic illusionist Jim Munroe of The Maze is my soon-to-be-friend.

Overall, we're looking forward to a great time together with all our friends in southern California.  If you're the praying type, we'd appreciate your prayers that my messages as well as those of the others speaking at the conference will be Christ-centered and that God will speak through them to the students and staff at the conference.

The rumor in Iraq is that the British have purposely released man-eating badgers near Basra.

This is probably no surprise to those of us who remember the international hoopla about the UK's use of SPY SQUIRRELS in Iran!

By the way, the UK has officially denied the badgers are theirs, but really, what would you expect them to say?

"As we told you, Agent Badger, if you are captured we will disavow all knowledge."
Posted by Matt Mikalatos at 7:35 PM 1 comment:

Baby M has a Christmas dance for you

Krista took this video of M dancing today, and I thought it was really cute. Just don't ask her to identify baby Jesus. She will ignore you. She clearly thinks that everyone already knows the answer to that question.
Posted by Matt Mikalatos at 9:09 PM 1 comment:

Give the gift of Imaginary Jesus this Christmas and I'll send a little gift along, too 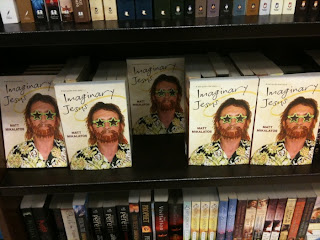 When you're looking for Christmas gifts this year, it can be a little overwhelming to look at, say, a bookshelf and know what book to choose for your loved one.

I wanted to make that a little easier for you this Christmas, by providing a tiny bonus if you purchase my book, Imaginary Jesus

If you buy Imaginary Jesus for yourself or as a gift before midnight on Sunday, December 19th, I'll send along a signed book plate with Christmas wishes for you to lovingly insert inside the book

.  Or, if you would rather buy the audio version, which I highly encourage, you can artfully decorate the audio box.  And lastly, if you'd like to buy the e-book

, you can permanently decorate your Kindle or other e-reader with a stylish sticker signed by yours truly.

Here's what you need to do:

2) Send me an e-mail to Matt.Mikalatos(at)gmail.com telling me that
a) you bought the book
b) what you'd like me to write on the book plate
c) where to send it


* I know what you are thinking, you sneaky little minions... "What if I e-mail Matt and tell him that I bought the book but I didn't really?  Then I will get a signed book plate for nothing BWAHAHAHAAHHAAAA!"  Well, I already thought of that.  And then I thought, it's Christmas, and if you cross me I will paint you red and green and put you under my tree.  So there.
Posted by Matt Mikalatos at 6:04 AM 2 comments:

In which I (accidentally) humiliate a Portland Hipster

Last night Krista and I popped into Banana Republic while waiting for our office Christmas party to start at our friend's house nearby.  As we browsed the men's department, Krista would show me different bits of apparel and I would give my pronouncement on whether I liked it.  Like this...

Krista: What do you think of this shirt?  It's not really 'you' is it?

Me: If I were rich and lived on a sailboat and could wear white chinos and deck shoes with no socks all year, then I would gladly wear that shirt.

We wandered into the coat section, and Krista grabbed a coat that was thrown over the racks instead of on a hanger.


Krista: This coat is nice.

Nearby (male) Hipster: Actually that's my coat. I threw it over the rack there while I was looking around.

Krista immediately steered me out of the store and into another store, completely mortified.  And the hipster wandered the mall like a broken ghost, crying and wailing and embracing the deep sea of sadness that confronted him with the realization that I didn't understand him at all, not at all.

Last night I had this conversation with young Miss Z:

Me: Did you look in your room?

Me: Could it be out in the van?

Me: Then put your shoes on and go look in the van.

Z: But that means I have to find my shoes!

Posted by Matt Mikalatos at 7:12 AM 2 comments:

This morning there was a beautiful rainbow as the kids and I walked to school.

Me: Kids, look at the rainbow!

Me: We should go get the pot of gold at the end of the rainbow.

A: God did not put a pot of gold at the end of the rainbow.

Me: No, that's true.  The leprechauns do it.

A: God did not make leprechauns.

My good friends at the Christian Science Fiction and Fantasy blog tour are going to be talking about a book called The Charlatan's Boy by Jonathan Rogers this week, so you can expect to see some great posts, reviews and insights from them over the next couple of days (see links below for bloggers who are participating). The Charlatan's Boy is the story of this charlatan who has a boy.

Oh, fine, I know, you want more of an explanation than that, and I understand why you would. Go check out the blogs below or the link at Amazon for a synopsis, because I want to talk about something else today. I want to talk about hucksters. Frauds. Fakes. Flim-flam men. Hmm. Why do so many of their names start with an f? It is a mystery.

Now, in television and movies we have a loving happy feeling toward our hucksters, because they are charismatic, charming and, after all, are only trying to provide the people with what they want! Snake oil! And the truth be told, we tend to like them in real life, too. We buy their hair care products! We fly to Mexico to get surgeries from them that are illegal in the U.S. We elect them to office!

I thought about this for a while and dug around to find a famous huckster from the past and came across the sad, strange story of John R. Brinkley. Brinkley started as a medicine man, the sort of guy who would travel from town to town and offer to inject people with colored water to help them overcome various illnesses. Eventually he hit on his paydirt idea, which was to offer to surgically insert goat glands into people suffering from various procreative problems. He eventually expanded what conditions the glands could help to include things like cancer. The man made a lot of money. He bought a radio station and used it to advertise his products, and used his profits to benefit the town he lived in, to the point that when California asked him to be extradited to face prosecution for various crimes, the governor of Kansas refused because the man was bringing in so much money for the state.

The guy might sound harmless, but he killed at least 40 people through malpractice. And when his medical (and broadcast) licenses were revoked, did he pack up and head for another town? No. HE RAN FOR GOVERNOR OF KANSAS. And he very nearly won!

His story is full of strange facts... after getting his broadcast license revoked he got permission from the Mexican government to build a broadcast tower so strong that people could get reception all the way in Canada. In fact, you didn't even have to listen to it on the radio... it was so powerful that people reported getting the station on electric fences and dental work. Amazing.

In the end, Brinkley was defeated by his arch-nemesis, Morris Fishbein, who tricked Brinkley into suing him for libel. The judge found that it was not libelous to call Brinkley a quack or a charlatan, because he was clearly both. This opened the gates to a flood of lawsuits that left Brinkley penniless until the end of his life.

Interestingly, you can still find people today who defend his medical practices and theories. That is the defining characteristic of the successful charlatan... people want his lies to be true.

There are a lot of people out there talking about THE CHARLATAN'S BOY this week. Check out my friends and their sites below: