This is the exact speech I plan to give for #Thanksgiving. Only my rap album was called FlimFlamWhackyWhack. 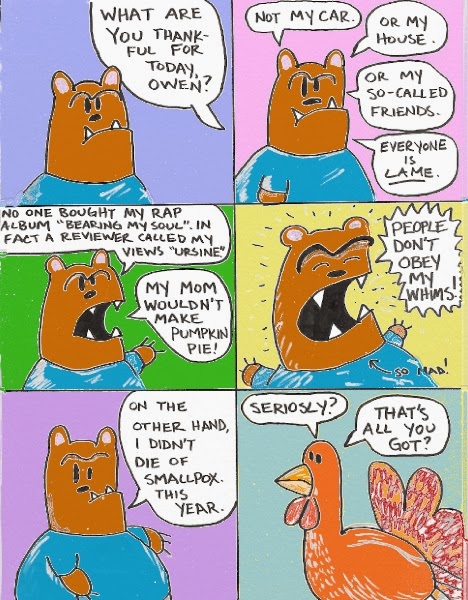 I think that turkey made a typo on purpose. Because Thanksgiving is not about u.
Posted by Matt Mikalatos at 7:03 AM No comments:

Email ThisBlogThis!Share to TwitterShare to FacebookShare to Pinterest
Labels: thanksgiving, this made me laugh

I overheard my four year old singing these words

Posted by Matt Mikalatos at 7:55 AM No comments:

Email ThisBlogThis!Share to TwitterShare to FacebookShare to Pinterest
Labels: baby m, M, stories from my children

Dedicated to the ladies working at my local gas station. One of them was stocking candy bars while the other tried to deal with an increasingly long line of customers, as the third clerk had abandoned her post at the other cash register.

Clerk #1 (looking at the line): Where's your helper?

Clerk #2: Bah. I don't know. Hopefully at a psychologist.

More Eavesdropping with Matt.
Posted by Matt Mikalatos at 7:15 AM No comments:

You have to watch this beautiful short film from Google about India, Pakistan and friendship

It's not in English. You can catch the gist without understanding the language, but if you turn on the closed captioning ("CC" button below) and make sure it's on English, you'll get subtitles.

Posted by Matt Mikalatos at 9:21 AM No comments:

This comic about LOVE made me laugh 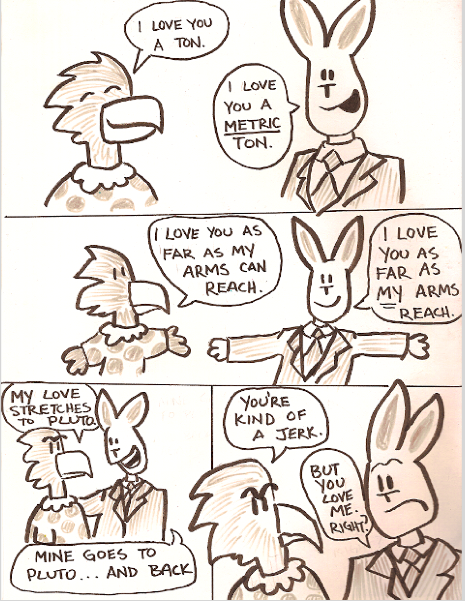 If you think that bunny's responses are sweet instead of annoying, then this children's book is for you.
Posted by Matt Mikalatos at 8:17 AM No comments:

Email ThisBlogThis!Share to TwitterShare to FacebookShare to Pinterest
Labels: this made me laugh

Things you do online that would be creepy in real life

Posted by Matt Mikalatos at 7:07 AM No comments: 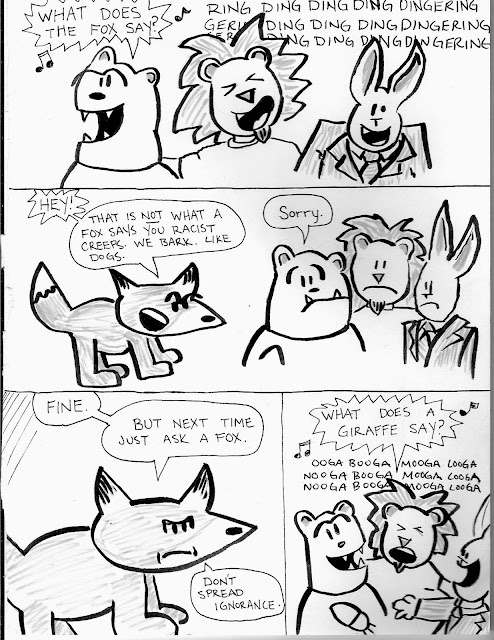 If you have no idea what this fox is talking about, think carefully before you click this link.
Posted by Matt Mikalatos at 6:59 AM No comments:

Email ThisBlogThis!Share to TwitterShare to FacebookShare to Pinterest
Labels: this made me laugh

This German rap group lost their instruments on tour, so they made this video. Pretty awesome.

I'm not vouching for the lyrics here, as they are in German and I have no idea what they are saying. Probably something about having lots of money and women, neither of which is in evidence in the video.

Via Neatorama.
Posted by Matt Mikalatos at 6:45 AM No comments:

A rare serious post about nightmares, life, protecting children and the Mercy Centre in Bangkok, Thailand.

I woke up this morning from a bad dream and couldn't get back to sleep. The dream had to do with a frightening person who wanted to hurt children. I laid in bed for a while, watching the darkness, but I knew it was useless. I was disturbed and thinking about the vulnerability of children... not my own, who are well-cared for and loved by many people. I started thinking about children in the world who are not so fortunate... children whose lives are much worse even than what I saw in my nightmare.

I came downstairs and checked my email to find a note from Father Joe Maier, a Catholic priest who discovered people who were hurting children in Thailand and decided to do something about it. He started teaching kids in the slums to read so that they would have choices in life, so they would have a chance to do something more than grow up as victims of poverty. Eventually this ministry became the Mercy Centre, an amazing shelter/orphanage/hospice/home in the center of the Klong Toey slums.

I've met Father Joe. Krista and I visited him the last time we were in Thailand. He's a man of God who believes that children deserve an education and a safe place to live and a family who cares about them no matter how poor they are, and no matter what religion their family practices. I was so encouraged by his email this morning that I wanted to share it with you. If you are looking for a ministry that cares for children, widows, orphans and the poor, or if you want to stop sex trafficking, or care for the terminally ill, or increase education in the world, this is an amazing ministry.

Here's a link to the email Father Joe sent out this morning.

I want to tell you a story about our time at the Mercy Centre.

Krista and I got into a cab at our hotel and told the driver where we wanted to go. Into the slums of Klong Toey. He thought we were confused and made the concierge tell him again. He drove us into a neighborhood that is reputed to be one of the worse slums in the world, but I couldn't help thinking that it looked a lot like neighborhoods Krista and I have lived in or visited in Asia plenty of times over the years. When we got to the Mercy Centre, someone ushered us into a high-ceilinged, tiled room packed with children of all ages. We took a seat beside them on the floor, and Father Joe came in wearing street clothes. He put on his vestments in front of the kids, making funny faces and sticking out his tongue while someone helped him pull the robe on over his head. He started performing Mass. Maybe five people in the whole room were Catholic, but Father Joe does Mass regularly. A young woman near us translated what was happening. She explained Mass, and she explained the sermon that Father Joe gave, about not hurting each other, about showing love to each other. He used an example from the kids in the room.

After Mass, I asked our translator about her own story. She smiled and told us that she had come to the Mercy Centre when she was young. Very young. She had come from a bad situation, she was being taken advantage of, and had started at first just coming to school at Mercy, but had later moved in to the orphanage. Eventually, she got accepted to college in the United States. She graduated and then came back to volunteer at the Mercy Centre, her old home. I asked her if it was hard to get into college in the United States and she said, "This is a dream that is available to anyone at Mercy who wants to take it."

I had a nightmare last night and woke up to Father Joe reminding me that there are children in the world who are living a nightmare. They can't wake up and walk downstairs and get on the internet and wait for their nightmares to fade. But because of the love of Jesus, Father Joe and a great deal of other people have come together to build a place that is not just a refuge from nightmares, it is a place where children are given the dream of a better of life and the tools to take that dream and make it part of their waking life.

If you are looking for a place to donate money, you can't do much better than the Mercy Centre. I sent them a gift this morning, as a thank you for reminding me after my nightmare that when someone is hurting children, we need not be afraid. Instead, we step in and help the children. You can donate here, if you would like. I took all the money from a recent short story I sold and used it to pay for a kid's education this year. As a former high school teacher and current missionary I honestly believe that education is one of the greatest ways we can be part of the transformation of the world. All learning leads toward Jesus, who is The Truth.

Last night we gave kids candy for dressing up as monsters and demanding it from us. Let's spend every other day of the year eliminating monsters and protecting kids from them.

Have a great All Saints Day and a wonderful weekend. I'll see you back here on Monday.

Posted by Matt Mikalatos at 5:32 AM No comments: