How To Communicate WIth Writers

I saw this on Marc Cortez's blog yesterday and it made me laugh, so I just knew it would make you chortle with joy, because you are waaaaay more easily entertained than me. 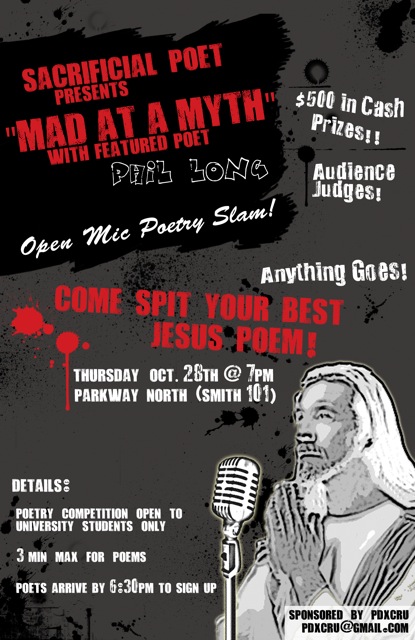 There's over $500 in cash prizes, which, as you poets know, is the lifetime salary of most poets.

Have fun!
Posted by Matt Mikalatos at 2:34 PM 3 comments:

My seven year old (A) overheard me talking to someone on the phone today; he was inviting me to come be the keynote speaker at a conference.  We talked about it for a while, and later in the night A and I had this conversation: 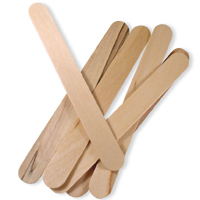 A: Dad, do all these people who ask you to come speak at their conferences actually want you to speak or do they just pick using popsicle sticks or something?
Me: Uhhh... you mean, do they just randomly choose from a big list of people?
A: Yes.

Me: They actually want me to come speak. I was walking through the supermarket this afternoon looking for Wheat Thins and mumbling under my breath, "Crackers, crackers, where are all the crackers" just as I walked by an African American gentlemen who looked at me like I was crazy. Because, let's face it, the Safeway by my house is just flush with crackers.

THE END
Posted by Matt Mikalatos at 9:09 PM 2 comments:

I was in Orlando last week and some friends started talking about "noodling." The more they talked about it, I started to wonder if they were messing with me. What they explained was that noodling is when someone swims down to a sunken log where big catfish live, and they stick their arm inside the log so that the catfish grabs on, and then they swim up and stick it in the boat.

The danger being that there could be poisonous snakes or snapping turtles in the submerged catfish hidey-hole and one can lose a finger or become poisoned.

In other words, it makes for excellent television.

I thought I should share this with you. My world is now a larger and stranger place.
Posted by Matt Mikalatos at 6:22 AM 9 comments:

Brought to me this week by an Amazon gift card from my sister:

First we have Michael Connelly's THE REVERSAL.I love the Harry Bosch novels and have read them all and I always buy the new ones in hardcover so I don't have to wait a minute longer than necessary.

Second is Parker: The Outfit, which is Darwyn Cooke's second graphic novel adaptation of a Richard Stark novel. The first one was spectacular, so I'm looking forward to this.

So this week is all about crime. Which I plan to observe from a safe distance here in my house, probably in my bed with my night cap on and a cup of warm milk at my bedside.
Posted by Matt Mikalatos at 6:29 AM 3 comments:

Z (whining): I wish I had brought my DS so I could do something in the car when we are driving at night.

Me: I wish you had some magic power that made you stop whining.

Z: I wish you had some magic power that made you stop complaining about your children.

Email ThisBlogThis!Share to TwitterShare to FacebookShare to Pinterest
Labels: stories from my children, Z

Shasta, friend of the Revolution and lady who could run a blog but doesn't want to sends along this video spoof of the Old Spice Guy, starring Grover the furry monster from Sesame Street:

I was always a fan of Grover as a kid. I especially liked his waiter sketches:

It's an early morning flight, and that means that the airplanes are all full of amateur musicians for some reason.  I saw a guy who looked like Sting but was probably ten years older than Sting, and the guy next to me right now has skinny jeans, a guitar and a girlfriend.

On the other side of me is a trio of revelers talking about the party last night which involved a great deal of heavy drinking, people falling down and a trip to the hospital, where someone was told that they had "minor bruising" which led to a great deal of cursing and paranoid accusations of the medical industry not acknowledging the pain of others.  From the pained looks, drawn faces and pale, sickly complexions of those around me I'm guessing that the entire plane has a hangover.  Not me, of course, I'm fresh as a daisy.  Possibly fresher than a daisy depending on the daisy.

Also, while walking through security I was stopped by the woman on the other side of the magic metal-detecting doorway, when she asked to see the other side of my face so she could look at my (non-existant) ear piece/bluetooth.  She laughed and said she had imagined it and just wanted to spend another thirty seconds with me, which made me wonder several things... if my earpiece doesn't set off a metal detector, why would they do a special check of it?  What if the same earpiece was in my pocket?  Is there anything more annoying than those people who walk around with an earpiece in all the time, as if they want you to know that it could be any second that they would need to ditch you and talk to the air?  I'm seriously asking: is there anything more annoying than that?

The answer is yes.  There are things more annoying than that.  It's annoying, certainly.  But not as annoying as, say, a rat nesting in your sweaters.  Or someone stealing your spare tire.  Or discovering that a pig has built an underground house beneath your house and has told a wolf that he lives at your house, so the wolf keeps knocking on your door and breathing on your house.

Aha.  You have been saved by the bell.  My flight is boarding.  Hasta la vista, amigos.
Posted by Matt Mikalatos at 5:19 AM 1 comment: 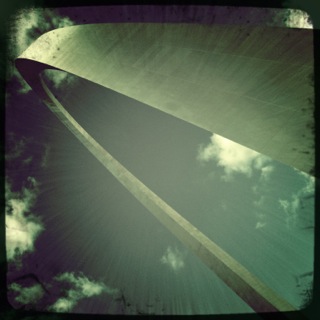 Yesterday after the Fall Getaway was over we headed to St. Louis to see THE ARCH!

Our seven year old, A, took this picture with Krista's phone.

After we hung out at the arch for a bit, we went underneath and walked around the museum of western expansion, and then we met Krista's cousing Mandy and her family at a restaurant called The Fountain on Locust, voted best ice cream parlor in St. Louis and best bathroom in America.  We had a great time.

This morning we'll meet with our friend and co-worker, Dan Allen, and then we'll be off to the airport and home!
Posted by Matt Mikalatos at 6:53 AM 1 comment:

Yes, my friends, the wife and I are packing up the children and the covered wagon and headed East for the great Missouri Fall Getaway.  I'll be the Bible teacher for the weekend, so you can pray that our flights are on time and that the poor students on the other side are able to have a deep, spiritual experience of connecting with God despite the inadequacies of their guest speaker.

In other news, we've released thousands of poisonous vipers into our home for while we're out of town (we'll be gone approximately three hours), as well as hired a housesitter and rented a vicious dog.
Posted by Matt Mikalatos at 11:13 AM 5 comments: