Banksy and the Grey Ghost

Every once in a while you stumble upon an epic of conflicting personalities of such scale that you hope that someone turns it into an opera... or at least a novel or a movie.

Such is the story of Banksy and the Grey Ghost. Banksy -- like any superhero -- keeps his identity secret. He's an artist who does public art. For instance, he climbed into the penguin enclosure at the London Zoo and painted a giant sign that said, "We're Bored of Fish."
(Also funny... he apparently convinced some people that his real name may be "Robin Banks." Ha ha.)

He also enjoys painting graffiti in New Orleans. With the 3-year anniversary of Katrina coming up, some of his work has appeared on the NO streets. 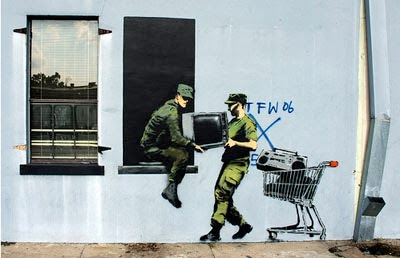 However, street artists across New Orleans watch in trepidation as the masked vigilante known as the Grey Ghost makes the rounds, covering over street art with gray paint. Banksy has thrown down the gauntlet, his recent art taking a shot at the Grey Ghost himself. 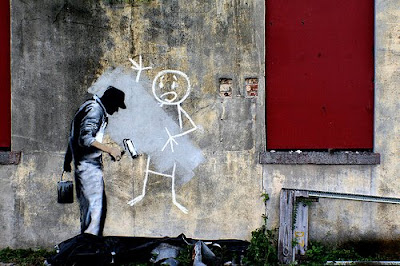 Meanwhile, the Grey Ghost is teaming with the city of New Orleans to battle the efforts of the group called NOLA Rising which is attempting to encourage beautification through street art.

I like the personalities at work here. The gifted artist who refuses to follow social norms, choosing to break the law although he could easily get his works in galleries... but doing it in such a spectacular way that you start to wonder why those laws exist. Meanwhile, the implacable Grey Ghost, without imagination, without appreciation, continues his crusade to remove the illegal art, replacing it with ugly, utilitarian grey paint, not even trying to match it to the colors of the buildings.

I look forward to seeing how this all plays out.
Posted by Matt Mikalatos at 9:20 AM