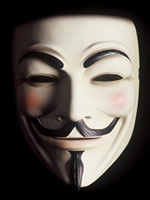 My Father, Father-in-Law and I went to see V for Vendetta last weekend. They are not to blame, it was entirely my idea, as I was interested in seeing the movie adaptation of the comic book, and also as the Wachowskis (of Matrix fame) had written the script.

I suppose the rest of you saw this coming as soon as I said "comic book" but I had sort of hoped the movie wouldn't veer into melodrama (it did). I also hoped that it might maintain some of the purity of the comic's study of anarchy vs. fascism and the grey spaces between the two (it didn't).

The main problem here was the sermonizing. I didn't go to see a sermon, but that's what I got. Instead of fascism vs. anarchy I got conservative Christians vs. loving (but firm) liberals. It makes it pretty hard to be entertained. On the other hand, it's a good idea for all the Christians to go see this movie so they can see how an unbeliever experiences so much of Christian media.

Things I disliked: the cartoony black and white morality essentially made this a film about a good guy who is a terrorist. As my father-in-law said afterwards, "I guess we should stay out of London for the next twenty years."

Last but not least: I am rather fond of anarchists. I think they are cute, like bunnies.

Posted by Matt Mikalatos at 8:39 PM