In Which I Meet Trotsky (well, almost) 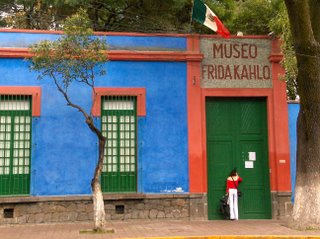 Now that we're home, I'll try to catch you up with some of the amazing events of our time in Mexico.

On Friday we tried to go to the Museum of Modern Art, which it turns out is being remodeled. At least, that's what we assumed when we saw the enormous metal gates with the spikes on it barring our entrance. So we made our way across town to see the Frida Kahlo museum. Which was also closed. The lady in the picture knocked on the door for about ten minutes until they let her in. I think they were having a staff party. 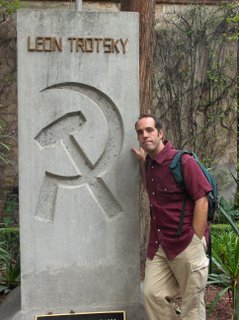 So we walked to the Leon Trotsky museum (just a few blocks away), which is really just the house that Trotsky lived in until he was murdered (with an ice axe). Here you can see a picture of an enormous stone slab with his name on it and the hammer and sickle. I'll be getting one of these for my back yard (but with my name and a giant burning heart).

The slightly strange and creepy part was the guy who was wandering the property dressed like Trostsky. Sometimes it seemed he was following us, and other times we walked into a room to find him waiting for us. 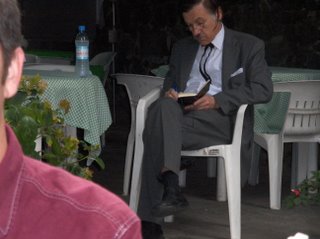 Krista took this picture of me and Trotsky together... because how often do you get a chance like that? Anyway, we debated for a while whether Trotsky-Clone is 1) a re-enactor, 2) a creepy tourist who likes to dress up like Trotsky or 3) a ghost.

Posted by Matt Mikalatos at 9:52 PM