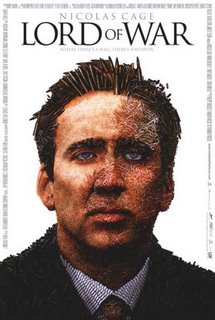 I have this tradition that when K is out of town, I rent movies that she would not want to watch with me. A lot of times what this means is that I end up watching a lot of garbage while she is gone. She's really altered my taste in films, to be honest. I just don't have patience for a lot of the movies that I used to like.

So. "Lord of War" with Nic Cage (and, as it turns out, Ethan Hawke) was actually pretty good. It's the story of a Ukranian-American who discovers he is very talented at selling guns, goes into business and becomes an arms dealer. It's well written and the acting is great. It's amazing how Nic Cage can take a completely detestable human being and keep him just engaging enough for you to want to see what happens.

The strengths of this movie all come out when it is addressing human nature and the depravity of people. The lies, the violence, the greed, and Nic Cage's character's complete inability to have normal human relationships, Ethan Hawke as the lawman who knows Cage is evil but won't break the law to bring him down, Jared Leto as the brother who self-medicates to dull the pain and suffering he sees in the world.

The movie weakens when it takes a didactic route to shove its message down your throat (believe it or not, the message is: Guns are bad and your government is a bigger arms dealer than any individual dealer out there). There are a couple places (the beginning montage that follows "the life of a bullet" from manufacture to murder, the completely unneccessary filmmaker's editorial titles at the end of the film) where the passionate anti-war message gets in the way of the movie. I think, in fact, that the movie would be a better propaganda piece if you dropped the preaching and stuck to the story. In some ways, honestly, it reminded me of a Christian movie: "And now, we will come out and explain everything about the movie to you and tell you, your life doesn't have to be screwed up like Nic Cage's life...." It's nice to see that we haven't cornered the market on didactic film making.

Overall, I enjoyed the film. Lots of good lines, good insights into human nature, African despots, families, bizarre anti-social behavior and one strand of story, at least, where we see some redemption, or at least righteousness. And, of course, we see that living a life of sin is its own hell.

WARNING: I liked the movie pretty well. But there is a reason that K wouldn't watch it, my friends. It gets an "R" rating for violence, cursing, drug use and some inappropriate sexual relationships.

Tomorrow night: Another movie about Africa. Another movie with guns. "The Constant Gardener."
Posted by Matt Mikalatos at 10:03 PM