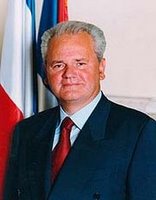 Slobodan Milosevic was found dead of natural causes in his cell today. A lot of people are upset about this, because they were hoping for justice... meaning that he would be convicted of crimes against humanity and, hopefully, executed. There's no doubt he deserved it. Mass murders, genocide, ethnic cleansing, a war in which rape was a social expectation... and he dies in his cel, apparently of natural causes.

It strikes me that this is the penalty we all face. Milosevic hurt and killed a lot of people, and in the end the worst punishment we could think of was the one God had already decreed for him: death. The same end decreed for me, for you, for all of us. It's just another reminder that we human beings are, all of us, more like than unlike. It's a reminder that Christ's salvation isn't only about being spared from Hell, it's also about salvation in our personal lives, salvation from the destructive presence of sin in our lives here, today.

I've already been tried and found wanting in the greatest court of law in the universe. But the judge has provided another to take my penalty, and I'm in a rehabilitation program now. My hope is to be more like Christ than like Milosevic when my moment comes.
Posted by Matt Mikalatos at 3:27 PM