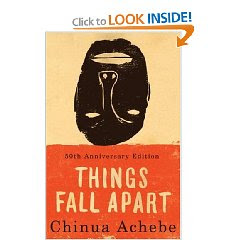 It's the story of Okonkwo, a tribal African who has worked hard to advance himself in the tribe to become a great man in the eyes of all around him, despite his lazy and shiftless father. An unexpected tragedy derails his rise, and when he finally gathers himself to effect his own redemption, the white men and their strange Christian religion have come to the village.

It's a fascinating story and didn't go at all the way I thought it would. It was really interesting to see "colonial literature" from the point of view of the "colonized." And, much like in Endo's Silence, it becomes clear that to the people of the invaded nation, it's very difficult to tell if there's a difference between the Westerners government and their religion... and this inextricable union of faith and government brings conflict and, ultimately, tragedy.

I enjoyed this book a great deal, though the ending left me unsettled. I think anyone setting out to do ministry overseas would benefit from reading this book. I can tell that this book, like Silence, will be one that will haunt me for some time. I am pleased, though, to find another author's work to explore.
Posted by Matt Mikalatos at 7:45 PM