This morning was "soccer morning" which is when we take the kids down to the park, walk through the wet grass and find out which team they are on. A lot of the conversation on these mornings revolves around who will be on which team, team names and the dreaded "what color will my shirt be." We spend a lot of the morning preparing A for the fact that, yes, she might be on the green team again and no, that does not mean she can throw a fit.

Z accidentally got placed in the wrong age group, so her team was about eight inches shorter than her... she turns eight next month and all these people on the team were saying things like, "My little Johnny is only five but he turns six in a few months and as you can see he is huge." Z towered over him.

Z, bored, was standing on her soccer ball while holding my arm. One of the Soccer Moms leaned over and said, "Honey, it's just a rule that you can't stand on your soccer ball. You need to get off that ball. It's just a rule, honey."

This immediately pushed my buttons. Here I am, standing between the Soccer Mom and my kid, and she leans over me to tell my kid what to do. Z was holding my arm, so clearly I knew what she was doing and had no issue with it. So I turned to Z and said, "That's not a rule. You can stand on the soccer ball if you want to." Soccer Mom turned away, but Z felt nervous (no doubt because of conflicting instructions from adults) and stayed on the grass.

I don't see any need to domesticate my children to the point that they can't stand on soccer balls. Sure, they might fall the SIX INCHES to the ground and hurt themselves. But then they learn a lesson. And I think that holding onto my arm shows that Z, who isn't a huge risk taker anyway, already knows that gravity pulls one in an earthward direction. Perhaps this Soccer Mom doesn't realize that I would perfectly happy if all my children were able to balance unassisted on a soccer ball while juggling tennis balls. And they aren't going to get there without practice. What would she say if they were trying to learn how to ride a unicycle... it's just a rule that bikes should have two wheels plus training wheels?

Anyway, we got Z switched to the right age group, where children are encouraged to put each foot on a soccer ball and walk on top of them down the field.

As for Soccer Mom, I saw her walking off with her son. He had a big stick in his hand and was hitting his Mom over and over with it and she was saying things like "OW!" and "STOP IT!" I thought about pulling her son aside and saying, "Hey, you shouldn't hit your mom or really anyone with sticks" but I didn't want to confuse him or interfere with Soccer Mom's parenting.

But then I thought again, pulled him aside, taught him to respect his Crazy Soccer Mom and people in general, threw his stick into a ditch and taught him to do something useful: 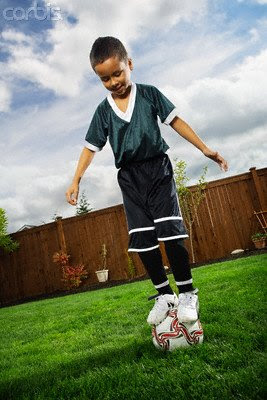 Email ThisBlogThis!Share to TwitterShare to FacebookShare to Pinterest
Labels: soccer