In Which I Sit in Judgment Upon Superman 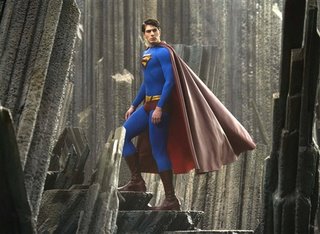 As many of you know I am a big Superman fan. Not a crazy, "I have a tattoo" kind of fan, not a rabid "I know Clark Kent's social security number" kind of fan, but a fan, nonetheless.

To celebrate the 4th of July, my Dad, sister and father-in-law traipsed off together to see the newest addition to the Superman mythos: Superman Returns.

***Spoilers are about to spoil things for you if you keep reading. ***

I left the movie saddened. Not because something sad happened in the movie, either. There were some cool parts from an effects point-of-view and a couple of decent action scenes (if it's really considered action to see a guy flying around and moving Very Large Objects).

I left saddened because Superman--at least the Superman in this movie--is morally weak in pretty much every way. He left earth several years ago because astronomers found the remnants of Krypton. He didn't even say good-bye to Lois Lane (who he had apparently *just* had sex with... and as Superman, not as Clark Kent). He comes home and briefly allows his mom to have a nervous breakdown before flying off to pick up where things left off with Lois (he never thought she was the type to settle down). When he discovers that she has a (vey nice) fiance who has been taking care of her and her little boy he proceeds to (1) fly to her house and use his x-ray vision to watch the family and his super-hearing to eavesdrop on them and (2) pick Lois up for an "interview" during which he tries to hook up with her again.

STUPID! Dumb, dumb Superman. Grow UP! For crying out loud. This is not Smallville. You are (supposedly) an adult. Use your powers for good, not to get chicks. You big, selfish brat. I will be glad when we discover you are actually a Kryptonian clone sent to prepare the people of earth for an impending invasion and the real Superman comes and kicks you around the planet you freaking self-centered pile of alien testosterone.

In other news of Complete Imbecility, Lex Luthor is pretty much a moron. He's supposed to be a super genius but the guy can't even get rid of Superman when he has an entire continent of Kryptonite. His big plan involves making some islands, luring Superman there and then letting some thugs beat him up. Um. Okay. And, in an unprecedented display of Dumbness, he flies a helicopter out to his new continent but it doesn't have enough gas to get him back to the mainland. I never really believed Lex was evil in this movie because--despite continually promising to kill billions of people--he was just too stupid to do anything other than rant at Superman. Which I could do myself (see above). So, expect to see me taking the slot of Superman's arch-nemesis in the near future.

Okay. I could vent at considerable length. I haven't even really approached the plot (mediocre) or the themes (clearly spelled out but strangely executed, especially for a franchise movie). But let me give you a piece of advice. If you would like to see a good movie about Superman, go see the 1970's version. Superman is moral, witty and likeable (three things the current incarnation was missing as he flew around mooning for Lois, smiling slightly at people and saving a couple of people from earthquakes, car accidents, big guns, etc.) . Okay, this was better than Superman IV and probably III. But really, what wouldn't be?

Posted by Matt Mikalatos at 9:58 PM