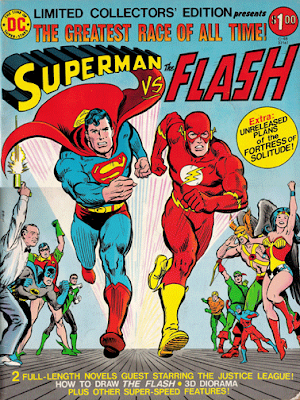 You may have heard that UK youth George Garratt has changed his name to Captain Fantastic Faster Than Superman Spiderman Batman Wolverine The Hulk And The Flash Combined.

Let us think about this critically. First of all, the Flash is clearly the fastest hero in this list, despite the occasional farcical race in which Superman ties him (yes, that's right, I am referring to Superman #199 and Flash #175). Let's be honest, here, the Barry Allen Flash could run at speeds approaching the speed of light... so that's pretty fast. Superman is a close second. However, Batman is an ordinary human being. So his speed would drastically lower the average. In fact, none of the others can come remotely near the speed of light. If we combined these six heroes together they would scarcely be able to break the sound barrier.

I will mention, however, that I had a small white stuffed cat in high school that we named using the same technique that Captain Fantastic Faster than Superman Spiderman Batman Wolverine The Hulk And The Flash Combined used. His name was Lyle Kyle Roscoe Shane Fuzzy Thing Jelly Doughnut Bat-cat Psycho Brain Gush.

P.S. Poor Captain Fantastic spelled his own name wrong. It's "Spider-Man" not "Spiderman." That's just sad for him.
Posted by Matt Mikalatos at 9:19 PM