Today is Veterans Day, which was originally Armistice Day, a celebration of the cease fire at the end of The Great War (on the eleventh hour of the eleventh day of the eleventh month... Nov. 11). A lot of people thought at the time that the "War to End All Wars" had finally taught us human beings a lesson, and that the world would never again stoop to such a bloody last resort. So Armistice Day, for many people, was a celebration of what they hoped would be a lasting peace. 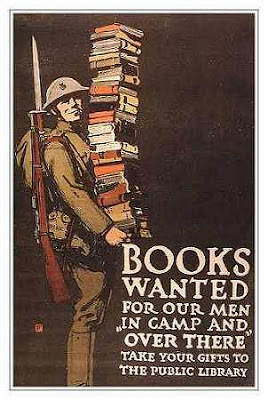 In the 1950s, people started to clamor for a chance to honor the dead and living of other wars, too, and so Armistice Day became Veterans Day (interesting side note... the US government has officially declared that it is, indeed veterans (plural) not veteran's (possessive)).

So... happy Veterans Day to all the Vets here at BHR and especially to my Dad, Pete, for his time in the Navy and my Father-In-Law Terry for his time in the army. Also my grandfather, Everett Jones, Army man, my Uncle Tom (army) and my brother-in-law Todd, currently serving in the Navy. Feel free to give your favorite veteran a shout out in the comments.
Posted by Matt Mikalatos at 9:27 AM