Today the family jumped into a truck, then jumped into a longboat and motored out to the islands.
Our first stop was Koh Hong, a beautiful island and a Thai national park. We swam, snorkled and built pristine white sand castles.
After a while, my wife Krista, my daughter Z, my parents and my father-in-law decided to go on a hike through the jungle. Krista's mom and our other daughter, A, stayed on the beach to play.
About halfway down the trail, Krista and my Mom turned back. We continued on, climbing over fallen trees and swinging on the occasional vine. Z seemed unaccountably frightened the whole time and kept asking if we could turn back. No, I assured her, there was nothing to be afraid of here.
Toward the end of the trail we came across a boat graveyard in the middle of the island, remnants of the tsunami. The splintered boats had ivy and jungle vegetation creeping over them, another testimony to nature's power.
The trail looped back to the starting point and we returned to our spot on the beach to discover that Krista and Mom had not yet returned. It seemed odd that we would get there before them... they had left well before the trail's halfway point.
I went back to the trailhead and started down the trail again. Perhaps one of them had turned their ankle and were waiting for someone to come along and help the get back to the beach. I reached the place where they had turned back and there was no sign of them. I walked a little deeper into the jungle and I heard a high and distant, "Haaaallo!" that sounded unmistakeably like my Mother's voice.
It's just a bird, I told myself. Or an animal. I stopped and listened. "Haaaallo!" I was almost certain it was my mother, but I couldn't tell where it was coming from. I ran ahead on the path, thinking they must be hurt. Why wasn't Krista calling out also? Could she be hurt or unconscious? It seemed unlikely, but maybe they had been kidnapped? "Haaaaallo!"
No, no, I told myself. That must be a bird or something. They are safely back on the beach, I'm sure.
I had noticed a short cut through the jungle and back to the beach. I ran along it and came out on the beach long enough to see that they still hadn't returned. That must have actually been my mother calling out, although why she didn't call for help or shout our names eluded me. I ran back along the jungle path, moving quickly. I stopped where I had heard the earlier cries, but now all I heard were the sounds of the jungle. Birds calling, distant longboats, crashing as animals forced their way through the underbrush.
I made a last trek back toward camp, watching the undergrowth for signs of someone being pulled off the path and into the thick tangle of vegetation. I watched for signs of a scuffle on the red clay path. I bent and studied suspect branches and broken twigs.
I stopped. An enormous lizard, easily four feet long, walked the path beside me. A monitor lizard. It saw me and slinked back into the jungle. A few feet farther and I saw another one, just as my father and father-in-law came up the path to tell me that Krista and Mom had returned to "camp." 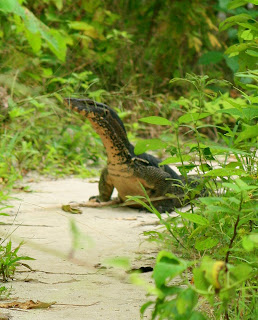 They had come across the lizards a few moments after they left us. One of the reptiles stood in the path, defiantly watching them and refusing to move. After a short time the ladies decided to try to catch up with us, but we were too far along. By the time I went into the jungle looking for them, they were farther along the path and Mom was shouting HAAAAALLO hoping that it would scare off any native wildlife (rather than terrifying her son).

In the end, I don't think anyone appreciated how genuinely terrified I felt for those ten minutes. All the worst case scenarios went through my head, and yes, some of those were informed by the fact that I watch the television show LOST. I have to admit, none of the worst case scenarios in my head involved monitor lizards. But some of them involved a troop of monkeys, and at least one involved deranged pirate-like people.

Everyone's safely home now. Including, so far as I know, the monitor lizards.
Posted by Matt Mikalatos at 5:41 AM