the great Vancouver Tornado of '08

For those of you who feverishly scan the newswaves looking for news from my home town, hoping to get a little extra news about me on the days when I don't blog, youve probably already heard about the tornado that came by our house on Thursday.
I was at the library taking a Greek exam. The thunder outside had gotten so loud that it sounded like someone shaking a giant metal sheet in the next building over. My daughter A called to tell me it was hailing, but I went and looked out the window and didn't see anything where I was.
Then one of the library workers came out and said, "Um, this is not a joke. There is a tornado warning for Clark County. We're going to have to ask everyone to move into the meeting room, the safest room in the library."
So we moved into the library. The library guy said, "We apologize for this, we're so sorry for the inconvenience."
An old man shouted, "WHY ARE YOU APOLOGIZING FOR GOD? He doesn't need an apologist! Are you responsible for this tornado?"
The library workers explained that this was the safest room in the library, built to a higher standard than the rest of the library. Someone asked if it was built to withstand tornadoes, which was met with a lot of shrugs. The giant glass double doors made me doubt it.
I decided I should make a run for home rather than being baby-sat by the library staff. I jumped in the car and headed for home. Along the way I saw what looked like piles of snow all over the road... which turned out to be giant piles of hail.
As it turned out, by the time the tornado watch got out there, the tornado had already lifted off again. But we did get some great pictures. 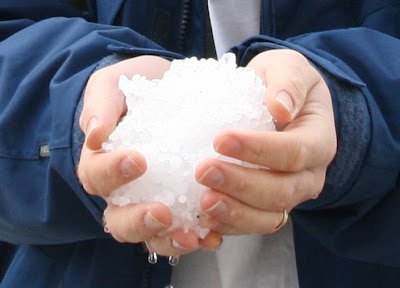 Here's me holding a handful of hail. So much hail had fallen at our house that you could scoop it up like snow.

So: Last week we were in the storm in California and then got snowed in at Grant's Pass on the way home. This week, a tornado in our neighborhood. We're looking for a sponsor from the weather channel. 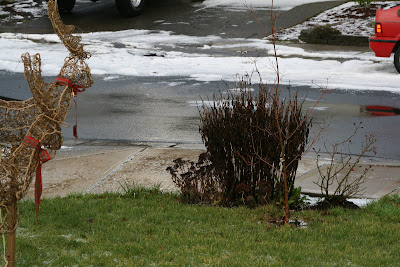 Lastly, here's a picture of some of the hail on the ground, as well as the strange metal reindeer that seemed to follow in the wake of the tornado. These strange creatures landed with a great clanking all over the neighborhood, nosing aside hail to find scraps of metal, which they ate slowly and carefully before taking to the skies once again.
Posted by Matt Mikalatos at 8:19 AM