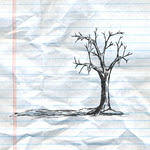 Jon Foreman's Winter, the second of a planned four EP release, came out last month. I managed to download it from our hotel in Bangkok and I've been listening to it here in Krabi, enjoying the irony of listening to the Winter album while wearing shorts and staring out over the Tha Lane Bay.

One of the nice things about Jon's seasonal releases is that I wasn't tired of "Fall" yet... I was still listening to it nearly every day. So having some more thought-provoking, enjoyable music is a treat.

I particularly like three of the songs on the new EP:

1) "Learning How to Die." See the post below for lyrics. This song gave me a deeper insight into the "Fall" album, actually. I realized (maybe I'm late to the party here) that the theme of Fall wasn't only the season, but also seems to be associated with THE Fall of humanity. It has a lot of songs about things not working out, temptation, giving in to temptation, and grief. Winter seems to be dealing with the fallout from Fall, just like the seasons, of course. "Learning How to Die" shows the inevitability of our separation from one another, the end of all living things and the necessity of embracing that in our current lives. It's beautifully written, lyrically and musically.

2) "White as Snow" takes the words of David, King of Israel that he wrote when he had committed adultery and murder. Jon sings it with a lot of feeling, and you can feel real remorse about the past and hope for the future. Again, this is one of the results of our Fall, that sometimes we turn to God for forgiveness, hope, repentance and restoration.

3) "Somebody's Baby." This was, to me, the most powerful and affecting song on the album. It's a love ballad to a homeless woman. It tells her story in a way designed to make you love her and wish you could step into her life and help her start over.

One of the things I've always appreciated about Jon Foreman (and Switchfoot for that matter) is that they aren't satisfied to keep doing the same songs over and over. What I mean is, each album has a new sound and pushes into new territory stylistically and thematically. This EP is no exception.

There you have it. If I knew enough surfer language I would say something profound like "This album is epic." But I don't. So I'll just say, I really like it. And I think you will like it, too. And I'm looking forward to Spring.

Posted by Matt Mikalatos at 5:40 PM