Krista's Aunt Diane took us and the kids to see Peter Pan (the musical) today at Keller Auditorium. Today was the last day that Cathy Rigby played Peter. She won a Tony for the part back in the 80's.

Captain Hook was, of course, the most fun, though hearing the kids all cheer when Peter flew on stage and clap and yell I BELIEVE IN FAIRIES was fun.

Z was hilarious. She kept saying things like, "Why are they just using a light for tinkerbell?" and "Peter is not flying. He is on a string." And later, "That's not a boy playing Peter Pan!" She has not really learned the term "suspension of disbelief". 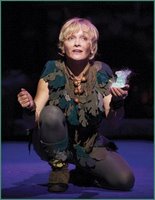 A was concerned about the pirates. "Are those real pirates or pretend pirates?" I assured her they were pretend. "Will they stay on the stage or come out in the audience" They'll stay on the stage. After that she relaxed and enjoyed the play.
Posted by Matt Mikalatos at 8:40 PM

Email ThisBlogThis!Share to TwitterShare to FacebookShare to Pinterest
Labels: A, Z