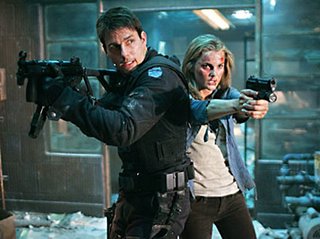 K and I went to see MI:3 tonight because her parents offered to take the kids for a few hours. Also, parts of the movie were filmed in east asia, so we thought that would be fun.

Anyway, the movie was fine, so long as you don't think about it too much. It had a sort of half-hearted anti-Iraq war message toward the end.

Basically, evil bad guy threatens to sell a weapon to the middle east, Cruise and company have to stop him at any price. Blah blah blah.

There were lots of silly east asia moments (okay, mild spoilers-- as if you care): like when Cruise is told to go to a city of over 20 million people and find the "feng shan apartment complex". That's enough to be "mission impossible" by itself. But then he's supposed to go to apartment 1406... which just wouldn't happen in East Asia because they don't like to have a 14th floor (kind of like us and the 13th floor) because if you say the number 14 the right way it sounds sort of like "want to die" which is not a great selling point.

And I liked how they would be in the city and then suddenly would be filming in a small village an hour away to give the impression that the big western city they were in still looks like a traditional east asian village.

But I will say the real suprise came at the end when Cruise's character electrocutes himself and cannot be revived. Perhaps one of the most moving moments in recent cinematic history.

Overall, a solid action flick. Better than Harrison Ford's latest outing (Firewall) and a million trillion times better than the last Crusie film I saw (War of the Worlds).
Posted by Matt Mikalatos at 8:35 PM