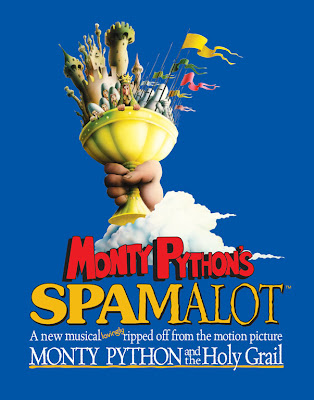 Tonight I went to Spamalot, my first Broadway show, and I have to say that we enjoyed ourselves immensely. Part of the fun came from being with my beloved wife, without a doubt.

As we rounded the corner of the theatre, we knew little about the show. We knew it was based loosely on the "Holy Grail" movie from Monty Python and that Tim Curry, David Hyde Pierce and Hank Azaria had been in the Broadway debut. What we didn't know was that the big name 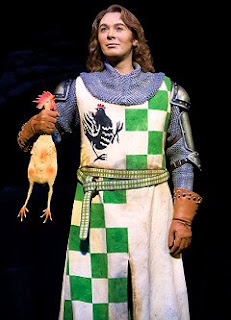 in the show for right now was... Clay Aiken.

Krista and I laughed about that and she assured me that she hadn't known. I'm not a big American Idol or Clay Aiken fan. A lot of people in the audience must have been because they applauded and screamed every time he said his lines without messing up. He's famous, I guess. As the guy next to us in the theatre told his father, "Clay Aiken's the Announcer-Guy on American Idol."

The first act of Spamalot left me grinning. It's funnier than the film it's based on, honestly. "The Song That Goes Like This" kept me laughing, as well as our heroes and their encounter with the Lady in the Lake and the Laker Girls. I could have done without much of the second act.

I would have gladly gone my entire life without hearing or seeing performed the songs "You Won't Succeed on Broadway" and "His Name Is Lancelot." Attempting bravely to balance these two travesties out was "I'm All Alone" and watching the Black Knight get hacked to bits on stage, followed by the ferocious rabbit. Please, someone, let somebody else read the Holy Hand Grenade instructions instead of Aiken. It's outside his range, I think.

All that to say, we had a great time. They closed the mezzanine for some reason and moved us to better seats in the balcony. Oh, and then we went for dessert afterwards and saw P Diddy. Yeah, apparently he was watching "Lion King" and fought his way out through his fans afterwards with his entourage. So we saw Clay Aiken and P Diddy in one night. Life in NYC, I guess.

Good night, everyone! See you tomorrow.
Posted by Matt Mikalatos at 11:03 PM