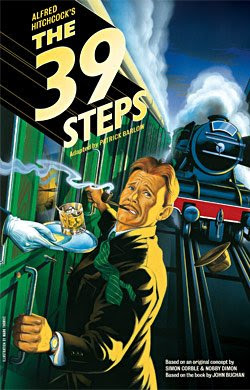 Thursday night Krista and I went to see "The 39 Steps" at the Cort theatre. The play is a sort of comic retelling of Hitchcock's movie of the same name, with the four actors playing about 30 or 40 characters, which sounds ridiculous and is. It's played up for comic effect, of course, and I, in response, laughed heartily. We had a good time. The staging was ingenious also, and the cast gladly pointed out from time to time how silly it was that they were pretending to be in car, or that they had one door frame to suggest every portal that must be crossed. It was a good show, and a lot of fun. Below is a short clip from the show that someone from the theatre uploaded.

Posted by Matt Mikalatos at 9:33 PM