Letterman, McCain, Mikalatos... together again for the first time 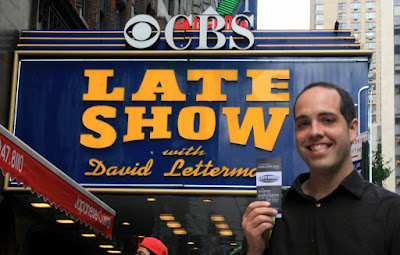 This morning started with a few hours at the Met, which I'll tell you all about later when I have more time. I know what you really want to know is how my adventures with Letterman and McCain went.

Krista and I arrived and stood in line to pick up our tickets to the show. We talked with the various Late Show workers and they could tell we were something special. They told us secret code words. They gave us special sheets of paper with secret initials. They marked our tickets with a magic signal. All of this was designed to make sure that we were put in the Very Front row. They said it was because we were cute and smiley. We could not deny that this was true, and so we accepted their invitation to sit in the Very Front. In fact, Krista and I sat at Letterman's feet during his monologue. We could reach out and grab his fancy red and white polka dot tie. But we didn't.

I could feel in my bones that Letterman sensed my presence. And not just with his eyes or ears, but with his deep comedic sense. So I wasn't surprised when he walked down to K and me during the first commercial break and said, "If McCain won't come out to talk with me, I want you to come up and be interviewed."

I laughed. Ha ha ha! But I should have known that Dave is not one to joke. He was serious. Deadly serious.

Luckily, McCain *did* come out for his interview, which is for the best since I wasn't prepared. Dave went after McCain pretty hard during the interview, but McCain is a tough guy and he fought back with good humor until he saw me out of the corner of his eye. "Is that you, Mikalatos?" he cried.

"You gave me a lot of trouble when I was in Arizona and people brought up your poetry contest to name new poets laureate!"

Dave interrupted to say, "Matt, I've been thinking this over carefully and I want to hire you to be on the show. Would you like to be the Ed McMahon to my Johnny Carson?"

I frowned in deep thought. "I don't think that I can do that."

"You could just be a writer for the show," Dave said.

"No, I can't do that either. I have a job that is deeply important to me."

"What sort of job is it that you have?"

Dave and McCain exchanged a glance. "How about we do a song and dance number together instead?"

I laughed, but Dave insisted. So McCain, Dave and I danced like a whirling storm of flying feet and sang a heartbreaking but hilarious song about Broadway, Presidential politics and Barak Obama's new plan to get us all kitties.

After that Ne-Yo came out and we had a dance off. I will admit that he won, though.

We all parted with manly hugs. I gave Dave my silver flute so that Dave and I would have no hard feelings. I still think it might be booby-trapped.

After all this Krista and I were tired, so we went out, grabbed dinner and then went to yet another Broadway show. Whew! It was a fun, exciting day. The next time I have a chance I'll give you a little update on the show we watched tonight (The 39 Steps) as well as our time at the Met.
Posted by Matt Mikalatos at 8:33 PM