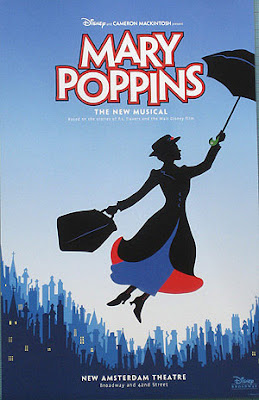 Our last night in NYC we went to see Mary Poppins. We bought these tickets ahead of time because I love the movie and we thought it would be a good show.
And it was. The new music and the changes to the original music were done in conjunction with the Sherman brothers, the guys who wrote the music for the movie.
The acting was great and the costumes and set were spectacular. The set in particular caught my attention. It had enormous moving parts, and much of the show took place in some section of the Banks home, and the third floor and roof could be raised up and down onstage.
Also, Mary Poppins has an evil nemesis in the play. Which was good for a laugh, but of course MP is practically perfect in every way and she really had no trouble dealing with the interloper.
At the end, Mary flew up over the audience never to be seen again. Until she showed up for the curtain calls.
It was a great show to end a great week together.
Posted by Matt Mikalatos at 7:39 PM