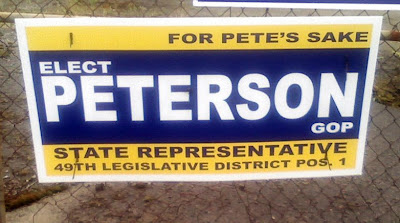 This slogan doesn't do much for me. Here's Peterson, running for State Rep. The name Peterson, of course, originally meaning "Son of Peter." And the slogan here is elect Peterson "For Pete's Sake." For me this brings to mind an old man named Pete, sitting in an easy chair in an assisted living home, and his son, Peterson is running for State Rep. Old man Pete has always desired Peterson to be in an important government job. And he thinks he could hold onto life if only his son could finally make it. ELECT PETERSON "For Pete's Sake".

This does not compel me. It seems that some consideration for the rest of the district might be better than just considering Pete.
Posted by Matt Mikalatos at 10:19 AM