I laughed, I cried

As you may recall, a few days ago I pointed out my new favorite church sign.

The minister at St. Paul's Episcopal wrote me promptly to say hello and I found him to be a nice and congenial fellow.

And then Makeesha left a note. Her church, Revolution (another Ft. Collins church making me smile) meets at St. Paul's a couple times a month. You'll love their website: The Naked Church.

Digging around on Makeesha's site I came across her links to a site where there are some satirical posters up about the emergent movement. As you know, I am not against satire. In fact, a couple of them were quite funny. But several were just mean-spirited and, I think, have moved beyond the realms of what I would consider to be Christian charity for other believers. One of the things I appreciate about the Door is that their satire is designed as a mirror for the church, not a baseball bat. 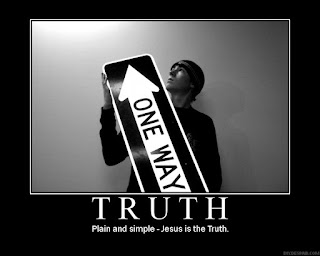 One of Makeesha's friends, Grace, made a series of response posters to the satirical ones that are so well-meant and sincere that it made me wince after reading the satire. Like this one on the right, for instance. And for some reason they created a big controversial series of comments. I agree there are issues of concerns in sectors of the emergent movement, but give me a break! No reason to misrepresent and twist it into something on the same level as Chick tracts. Please. 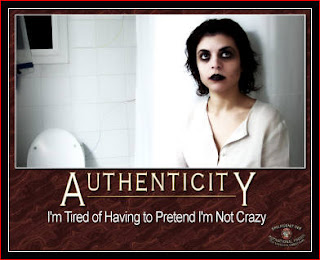 I think this poster at left most clearly shows the conflict, and was my favorite of the satirical pieces purely for the irony.

Here we see the Critic telling us that the Emergent philosophy of authenticity is basically, "I believe in authenticity, which means I can stop pretending that I am crazy... I can actually be myself (I am insane)."

Which of course shows the modernist proclivity toward creating a facade of perfection and a desire not to share the reality of what is going on behind the mask, not to share the fact that they, too, are coming apart at the seams sometimes.

All of which causes us to collapse into useless generalizations. Modernists are This and Emergents are That. And the generalizations have long since ceased to be useful. Things have become far too diverse and complicated for that. Somebody explain to me, for instance, why the Emergent generation (which supposedly doesn't believe in absolute truth) is becoming increasingly Reformed (which doesn't leave room for anything but).

I'm not sure why we can't have friendly conversations about these things. I think Grace has been very generous in her responses. Our Satirist has made more satires. I think everyone should go read this book and then we can all be friends again. D.A. Carson treats the emergent movement fairly, leveling critiques and pointing out the innovations and changes they bring that will breathe life into the greater movement of the Church.
Posted by Matt Mikalatos at 9:24 PM