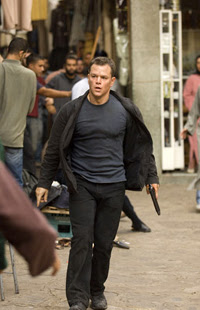 I've seen at least seventy-three reviews of the Bourne Ultimatum that are titled "Bourne Again." I thought I would shake it up (barely) with a different title. Boy am I ever clever.

Just so you know, I really liked the first Bourne movie. A lot. It dealt with complex moral and emotional issues and had great pace and action. The second film I liked not-so-much. And this, the third, I liked somewhere in the middle. It's great so far as being full of action, but completely lacking in any emotional attachment. In other words, you don't really care about Bourne, his quest, his friends, or anything other than when things will slow down enough for you to unclench your fingers from the handrests. But there are some really great action scenes.

So. Decent movie. A little shaky with the whole hand-held camera thing. I couldn't even tell what was happening sometimes in various action scenes. I realize that this is to make it seem as if we were there. You know, "In real life, a camera would bounce around if a camera man were chasing Bourne up a flight of stairs and then jumping out a window." Sure, I know. In real life the camera man would have stopped about ten minutes into the movie to lay down on the sidewalk and catch his breath. But I don't want to see two hours of that now, do I?

Some strange things to notice about the Bourne Universe if you go see the movie:

1) No airbags in any of the cars. I don't care if it rams into a wall going 120 MPH, you won't see any airbags deployed. Why? Because, as near as I can tell, Jason Bourne has gone around to all of the cars that he thinks he will drive or will be chasing him and disconnected them.

2) The agents of the CIA all use flip phones able to send and receive IMs with pictures. But they never, never use PDAs or anything like that.

3) On the other hand, many of them have pistols fitted with movie cameras. That's nice.

4) If you mean business in the Bourne Universe, you better put your jacket on. "Bourne, someone is coming into the apartment to kill you!" "Hold on, let me get my jacket on." Any time an assassin gets a text message to go kill someone he will put down his cel phone and put his jacket on. Do me a favor if you go to the movie and count how many times someone puts on their jacket. I started late and I think there were seven scenes of jacket-donning. Note the picture above: Jason Bourne is walking through a crowd, a gun in his hand and -- GOOD GRIEF! IS THAT A JACKET HE'S WEARING? Someone is in trouble.

Matt Damon says this is the last Bourne movie (for now) and this is probably because (SPOILER) Bourne loses his jacket somehow along the way.

I would like to end this post by thanking the Bourne movies and Matt Damon for kicking the James Bond and Batman franchises in their collective patooties and forcing them to make some good movies again (or finally, depending on your taste). Gracias!
Posted by Matt Mikalatos at 7:06 PM