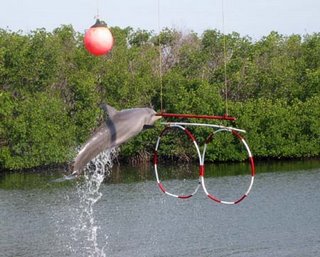 I always think it's funny when people on documentaries say that various animals are "the smartest on earth." On the list: dolphins, various types of monkeys and chimps and pigs.

And how do we measure intelligence in these geniuses of the animal world?

Well, it's because they do what we say.

Dolphins, for instance, will push a button with their nose in response to seeing the right combination of flash cards. They train pretty easily.

Not that it's any different with human beings. We socialize kids to "know" the right answers but it really has more to do with obedience to what they have been taught then to independent, intelligent observation of the world around them.

Case in point: What color is the sky?

And of course the answer: Blue.

Unless it's at night. Unless it's sunset or sunrise. Unless it's overcast. Unless there is smog. In fact, I would guess the sky is blue far less than 50% of the time most places on earth. But it's still the correct answer. The answer "blue" has very little to do with intelligence.

All that to say this: it is possible, nay, likely that the smartest animal in the world is the common household cat. It does not do what it is told. It does whatever it wants. It trains human beings to feed it, to pet it, and to clean up its feces. It also tricks human beings into thinking that they are in charge. That is pretty smart.
Posted by Matt Mikalatos at 8:06 PM