Get Your Name In Lights 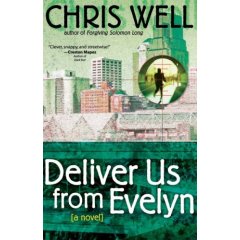 As I was saying, my friend Chris Well, the novelist, is turning 40 this week. In honor of his own birthday he is giving away gifts to anyone who buys his second novel, Deliver Us From Evelyn, on Amazon.com tonight, tomorrow or Thursday morning. In addition to various swag, you will also receive a thank-you by name in Chris' next novel, coming out next April.

Anyway, buy a book, be immortalized in the sequel. It's like paying to see "Star Wars: A New Hope" and then having Luke Skywalker in Empire Strikes Back say, "You're not my Father! I'll never join you" and then turning toward the camera and saying, "A very special thanks to Matt Mikalatos for making this moment possible." It's that good.
Posted by Matt Mikalatos at 6:29 PM