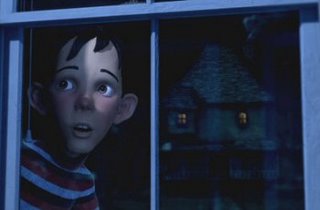 Get ready to be surprised: I actually liked this movie. Yes, the movie snob that wrote angry hate letters against "Superman Lives" and dissolved into tears at the utter stupidity of "Pirates 2" actually liked this one. In fact, I liked it better than any other thing I've seen in the theatre this summer.

The writers were clearly fed a steady diet of comic books, B-movies and video games as children, and this is what rose from the primordial stew of their subconscious. The plot of the movie is simple: the house across the street is, um, eating people. Dogs. Police cars. And of course no one believes the three kids who know the truth. So they have to somehow destroy the house themselves.

Before you roll your eyes and say, "Only Mikalatos could like a crazy movie like that" allow me to say that I took my *wife* and she also liked it. Go figure. In fact, we both agreed that the interactions of the three kids reminded us of an old family favorite, "The Goonies."

It was actually well written. And funny. I laughed out loud multiple times. And the animation was great, too.

Two caveats (because you know I am too cranky to ever give a movie the Golden Seal of Approval):

1) It was honestly a little too scary. When you're making a funny-scary movie, you have to be careful that the scary doesn't get too S-S-S-C-A-A-A-A-R-R-R-R-Y. And there were parts in this one that just went a little too far for me.

2) The house, yes, is haunted. There is a spirit in it. I felt it would be important for those of you who are sensitive to such things to know that. I would say that the writers appear to be secularists at heart who believe in the supernatural only long enough to be plot filler for their movie. I would say that on the Satanic Presentation Of Spirits scale it's well, well below Amityville Horror and is much closer to, say, the Munsters. Or maybe the Addams Family.

Overall, I really enjoyed this movie. It's a harmless love letter to B-movies more than anything, and it's fun and well done.
Posted by Matt Mikalatos at 9:25 PM