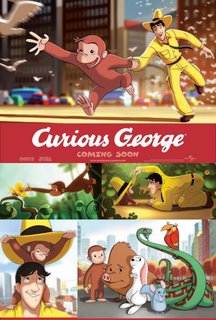 While watching "Curious George" I was mostly struck by the exact parallels between CG and "King Kong."

In both movies, a somewhat goofy dreamer heads off into the jungle, finds a monkey, brings it back to the Big City where the monkey creats havoc, a girl falls in love, and then the monkey is killed with airplanes. Identical!

The movie was pretty cute, fun for taking the kids to see. The colors in the animation were nice, pretty to look at, though the human beings did not move very convincingly. The soundtrack was mellow and soothing. There were no bad guys, no cursing, no anything but a relaxing, fun kid's movie. Okay, there's an idol. But it's purely presented as an archaeoligcal curiousity.

Overall, a really good time with the family. But then again, it was probably the company that made it good.