Z. reviews the Wolf of Tebron

.  I asked Z. (my nine year old) to read the book and give a report back.  And here's what she brought me: 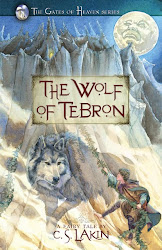 What is the story about?
The Wolf of Tebron is the story of a man who wishes his wife away with his anger.  And he goes to find her while he’s going he meets a wolf.  They go together to search for his wife, and the man keeps having dreams about where his wife is.  She seems to be trapped in ice or glass.  He has to climb a cliff but every single time he tries to climb the cliff he falls back down again onto the beach.  And there’s an ocean by the beach.  He is told to travel to the Palace of the Moon. But there are other palaces he will have to search first before he can get near his wife....
What did you like about the book?
I liked it because it was a kind of mystery because you wouldn’t know whether he would get his wife back or not.  I liked the talking wolf.  It was fun to read.
Was there anything you didn’t like about the book?
No.
Would you suggest this book to your friends and why?
Yes, because I think that they would like it.
If people like a certain kind of book, will they like this book?
It’s a little bit like Harry Potter because it kind of has magic, but anyone who likes mysteries will like it.
Do you want to read the next book in the series?
There’s another book in the series? Yes, I want to read it!
Thanks, Z!  She has already passed the book along to the next sister in line, eight year old A.  She's enjoying it and also asked me to tell you all that it's a great read.
Posted by Matt Mikalatos at 7:25 PM