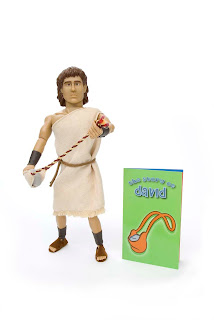 Your Own Personal Jesus

The fine folk over at BuyTalkingJesus would like you to buy-- for just twenty dollars-- a talking Jesus doll that gives you a "direct connection" with Jesus. Talking Jesus says things really close to the Bible, like, "Love others as much as you love yourself." Your kids will just love to see what Jesus says to Ken and Barbie! Be sure to watch the commercial!

Fellow revolutionist Ken writes in to encourage everyone to check out the You've Been Left Behind post-rapture e-mail service. For a $40 annual fee, a cabal of savvy Christian programmers will host your post-rapture messages to loved ones. If they don't throw the "dead man's switch" every six days* an e-mail will go out to all your loved ones that says, "Remember when I told you about the Rapture and you laughed? Guess where I am now?" And the name "You've Been Left Behind" will gently remind them who was right about that one. I've left a message with the "You've Been Left Behind" website to tell them that I don't trust the emails will go out without a human at the computer, and that I sincerely hope they will hire a couple of pagans to come check and make sure everything works correctly once I fly into the sky.

*Now we know what "the button" was that Desmond kept pushing on the Dharma Initiative's Island. 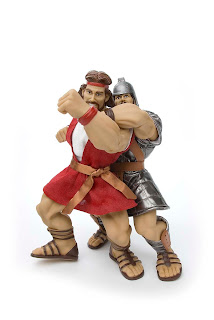 The Further Adventures of Samson and Goliath

From the people who brought you Talking Jesus comes SPIRIT WARRIORS! These great action figures (pictured at right) are two of the greatest warriors in the Bible... Samson and Goliath! The only thing they are lacking is a media tie-in. I will provide one!

NARRATOR: Once mighty heroes upon the Earth, the dead warriors Samson and Goliath are sent back to fight at one another's side... for justice!

SAMSON: Are those two men trying to steal a car? I will tie their tails together with burning torches!

GOLIATH: Hold, Samson! Perhaps it is their own car, but they have locked the keys within the vehicle.

SAMSON: Do you think I'm blind? I have two eyes, Goliath.

GOLIATH: I thought the Philistines poked them out.

SAMSON: I forgot. Wait, there's an army massing over there to do evil. Let's go kill them.

GOLIATH: But first let's taunt them for weeks on end.

SAMSON: Ha ha! Yes, and I will give them an obscure riddle based on my own life that they will never be able to figure out... unless I fold to the pressure of a pretty girl and she tells them all about it.

SAMSON (under his breath): At least I didn't get killed by a little boy.

GOLIATH (angry): At least I didn't die a blind and straggly-haired slave!

SAMSON: Let's not fight, Goliath. Let's focus on the things we can agree on.

SAMSON: You know... there is one thing we both love.

(Cue Music and Credits as Samson and Goliath slap each other on the back in a good-natured way.)
Posted by Matt Mikalatos at 6:12 PM