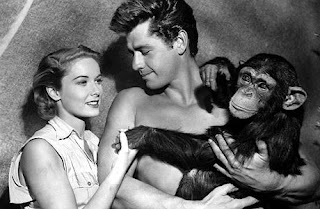 As you know, I often feel sorry for rich people and famous animals.

That's why I think it is well worth your time to go help Cheeta (Tarzan's strangely named chimpanzee sidekick) to get a star on the Hollywood walk of fame.

I think it is only right that Cheeta have his name on the filthy sidewalks of Hollywood where the drunks and drug dealers and prostitutes and occasional lost tourist can look down and say, "Hey, I think they misspelled this animal's name!"

If you don't Godzilla will be angry. “Ha ha ha…I’m just kidding, Godzilla doesn't care what humans do!” Also, he already has a Hollywood Star.
Posted by Matt Mikalatos at 4:09 PM