On The Edge of the Dark Sea of Darkness 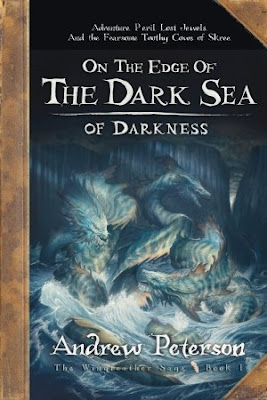 I recently read On the Edge of the Dark Sea of Darkness by Andrew Peterson.


I have to admit that I picked up the book, instantly skeptical. The name threw me, I think. On the Edge of the Dark Sea. Of Darkness. I thought, "That's completely unecessary. Not like we're expecting the Dark Sea to be the Dark Sea of Light." The only thing that would have made me more skeptical would have been if there had been a quote on the back proclaiming "BETTER THAN TOLKIEN." But there wasn't one of those.

It didn't take me long to realize that my skepticism was unfounded. I found the sense of humor and fun in the first few pages lifted my expectations immediately, and I kept turning pages thinking, This might actually be good.


The Novel Whose Name Is Too Long For Me To Continue To Type Out (now referred to as OTEOTDSOD) is the story of the three Igiby children, who live with their mother and grandfather in a town oppressed by an occupying lizard-creature army. The nearby woods are full of dangerous creatures (though not too frightening for the kids... the "toothy cows" being an excellent example). Of course the children discover that all is not as it seems, and of course they are key players in the uprising against the forces of evil that have captured their town.

The thing I enjoyed most about this novel would definitely be the relaxed sense of humor. The land of Aerwiar, for instance, received its name because the first resident of the land looked around and said, "Well, here we are." The humor occasionally strayed toward the childish, but this is, after all, a young adult novel. Which means this is a strength, not a weakness.

The plot follows basic fantasy norms, so there aren't any real surprises in that sense. But the style is fun, and the content is appropriate and spiritually valuable without becoming preachy (or really overt at all). So you can feel confident that your kids could read it without worrying about what they'll come away with. In fact, I just put the book in my six-year-old daughter's hands and told her to have at it.

And OF COURSE since it's a fantasy novel it's not complete in and of itself. It's just part one of the story. FYI. So, really solid overall. I would gladly recommend it, especially to people looking for something to read to their kids.

Lots of people have reviewed the book today, and others will continue to do author interviews and so on. So if you want to know more, check out one of these links:

Email ThisBlogThis!Share to TwitterShare to FacebookShare to Pinterest
Labels: andrew peterson, on the edge of the dark sea of darkness