Imagine for a moment that you have taken your children to the Ogden Eccles Dinosar Park. You are taking a break on the drive from Colorado to Washington.
As you come around a dark corner you find that you have entered a dark side room where an animatronic tyrannosaurus rex is attacking a triceratops and her two babies. There are loud roaring sounds, the dinosaurs are moving around and baring their various pointy parts at one another in a threatening way.
Your children (let's just imagine they are little girls, aged 4 and 6) are frightened. You point out to them that the dinosaurs are not real, but that doesn't help. You point out that the enclosure has what appears to be an electrical fence separating you and the children from the dinosaurs. You point out that the pterodactyls "flying" in the background are not moving, which proves that they are fake.
None of this works.
So you finally say, "They are not real dinosaurs. They are robots and they won't hurt you."
This seems to calm them. In fact, a little while later they ask to go back to see the robots.

Multiple Choice Question: You have just made a horrible mistake as a parent. What is it?

A) Maybe they really were dinosaurs. How close did you actually get to the fence?

B) Dinosaurs, now extinct, should not be feared. Robots, however, still exist and could stage a 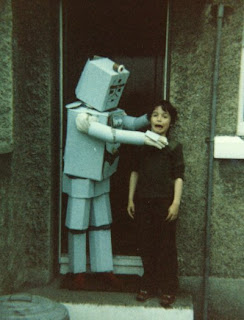 revolt in which they destroy humankind. You've taught your children to fear dinosaurs and love robots. You are a traitor to the human race.
C) Now your kids will want a robot of their own.
D) You will now be forced to constantly refer to anything frightening as "a harmless robot." For instance, "Daddy, I think that mean dog is going to bite me." "Honey, that dog is a robot. It would never bite you."
E) The baby triceratops probably heard you and now has low self esteem, thinking that it is not a scary dinosaur. This is precisely the sort of weakness that makes for an excellent T-rex snack.
F) Everyone knows that the T-rex and the triceratops were in different paleolithic eras. 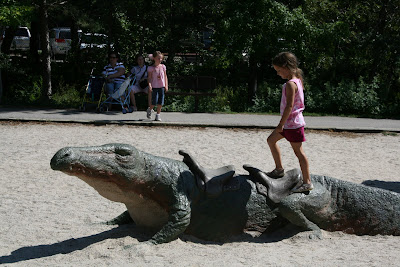 G) Good grief, man! What if your children mistake an enormous crocodile for a "robot" and try to saddle and ride it?

BONUS: True or False. When you find the "fossilized poop" section of the museum you should run to find your wife and kids so that they can see million-year-old excrement.
Posted by Matt Mikalatos at 9:15 PM

Email ThisBlogThis!Share to TwitterShare to FacebookShare to Pinterest
Labels: A, parenting, Z