An American Washerman in Korea 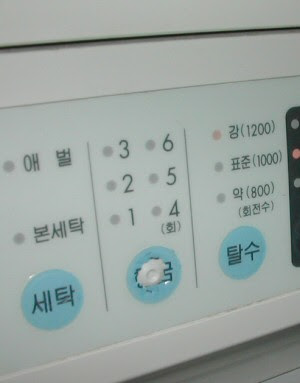 My luggage and I parted ways on the Road to Korea. Perhaps because my luggage had never seen the foggy streets of San Francisco, or perhaps it had heard us lovingly describe our favorite restaurants in the most beautiful city in the world.

In any case, I left my bag in San Francisco.

Which meant that my wardrobe for the first four days of my stay in Korea consisted of: two pairs of socks and underclothes, two shirts and one pair of pants.

However, the (admittedly posh) dorm room that ten friends and I shared had a washing machine. It was in Korean, yes, but an intrepid adventurer never lets the lack of language persuade him from his determined course.

So, I decided one night to experiment by washing a pair of socks, a pair of boxers (or "box tops" as my daughter A calls them) and a shirt. Having lived in Asia I strongly suspected that the washer was also a dryer, but worst case scenario I would have one dry but dirty set of clothes and one wet but clean set. And either way I would still have dry and dirty pants, if that can be considered a plus.

The washer accepted the proferred clothing, locked its door, and immediately began to wash my clothes. The timer set itself to two and a half hours, which caused a great deal of speculation among my roommates. What could it possibly be doing for two and a half hours? Why did it need possession of my clothing from midnight to mid-morning?

We found out at two-thirty in the morning when the washer let loose with a melodious, doorbell-like chime to announce my clothing not only clean, but warm and dry. Hooray! There was much rejoicing!

Okay, it was only me rejoicing. But I think my roommates were suitably impressed by my potential as an Asian launderer.

The next night I decided it was time to take it to the next level. I would wash both shirts, both pair of socks, one pair of boxers and my pants. If all worked well I would be clean and my clothing would be clean as well. If things went poorly, I would still have... a pair of boxers. And a sweatshirt. Oh, and my sneakers.

The first sign of disaster looming was when I offered my clothing, the washer accepted it and locked its door and set its timer for one and a half hours. Adam Rapelje, our Room Captain, pointed this out to me. He mentioned that this did not appear to be a good omen. I concurred. However, I figured that if this meant--as I suspected--that the washer was not interested in pulling double duty as a dryer tonight, then I could still hang the clothes up at one thirty and they would be dry by morning.

So I hung them up at one-thirty when the doorbell-like-chime woke me (I was sleeping in the kitchen/laundry room). I woke again at five and felt for the clothes. Water could still be wrung from them. They were absolutely soaked. I needed them by seven, when Krista and I were due to meet. I got out of bed (or "off of floor" if you are a stickler for accuracy) and pushed all my clothes into the washer, hoping to make it a dryer.

After a lot of button-pressing and knob turning and Korean-deciphering, I managed to get the dryer turned on. The door lock snapped into place and the drum began to turn. My clothes were drying!

And they kept drying. When I tried to get them out at six fifty-five, I couldn't. The LED on the dryer kept saying "HOT" whenever I tried to open it. Which I could only assume meant that it was too hot to open. Which meant that my worst case scenario of wearing clean but sopping wet clothing had now become wearing a dirty pair of boxers and a sweatshirt. Which didn't seem like much of an option.

Krista arrived and wondered if I had just woken up. "No, this is what I'm wearing," I announced. One of the guys ran down to the housing office to see if someone could read Korean.

And yes, someone could. But not much English. He pressed a cunning sequence of buttons and the door lock snapped open. He looked into the window and could see the clothes in there, and figured that I wanted to wash them. He started to press the code in to lock my clothes into the washer for another two and a half hours, but I zipped up behind him, snatched the clothes out and thanked him profusely.

My baggage came later that day, now that I had learned that I didn't need it, now that I was proficient and self-sufficient.

Next time you're in Korea, let me know if you need help with the washer.
Posted by Matt Mikalatos at 7:52 PM