A Pox on Early Clappers 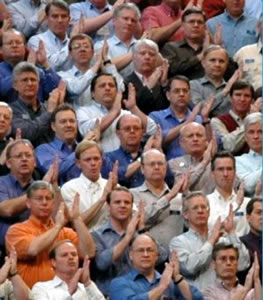 I have noticed with some dismay a recent and disturbing trend of early clappers. Perhaps you have sat in front of these individuals. These are the people who CLAP CLAP CLAP a moment too early. Perhaps the song is still being sung. Or the speaker is on her next-to-last word. It is distracting. It is annoying. It is a desperate ploy for attention. It is disrespectful. It gives the impression of a cloying, fawning sycophant.

Clapping, as we all know, is meant to be a frightening show of solidarity. It is--as the picture above can attest--a terribly serious business that will not allow for smiling or individuality.

If one must be an individual when clapping, here are some suggested techniques that are more acceptable and less revoltingly servile:

2) Try to be the last person to clap rather than the first. (Note: clapping for more than ten claps after the penultimute clapper will give an impression of sarcasm. Use this wisely.)

3) As a variation on #1, do not clap, furrow your brow, scowl, hunch your shoulders and cross your arms.

4) Emit a piercing whistle just as the clapping is ending.

5) Stand-- as if for a standing ovation-- but stop your hands ten centimeters before they come together. This is called "phantom clapping". It is most effective if your hands are held over your head so that people can tell you are not actually clapping. If an entire audience partakes of this terrible criticism of a performer it is referred to as "a standing no-vation."

6) Snap your fingers instead of clapping.

8) Stay home, alone. Clap every time you hear the word "allergy" on the television.

9) Clap only when you see clearly marked "APPLAUSE" signs.
Posted by Matt Mikalatos at 7:03 PM