Monday morning Adena led us in a devotional time all together. It was a little bittersweet, actually, for me, because she led us through I Thessalonians, which just reminded me how I was hoping we would be in Thessaloniki this summer, studying the book in the place where it had originally been directed. But Adena did a really great job. 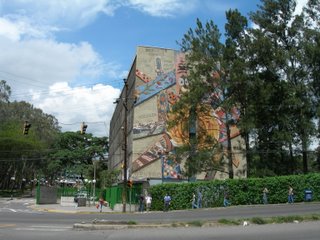 Then we headed off to campus to do some evangelism. I went with Adena and K went with Alex to do evangelism. We agreed we would all meet up after lunch.

Adena and I had a great conversation with three freshmen girls, one of whom was named Anna Marie. She said that she had been asking God over and over to teach her how to be closer to him and that he never answered her prayers. I told her that maybe we were the answer to her prayer and she said maybe that was right. She also said that she heard God talking to her while we shared the gospel with her, which she found strange because a lot of times she felt that praying was like "talking to a wall." Be praying for Anna Marie.

When we found Krista and Alex again, Krista told us her bag had been stolen. Credit cards, camera, wallet... even her Bible. All the pictures on here are borrowed from someone else. We were sad to see her bag stolen, but so thankful that she hadn't been mugged or harmed. Apparently someone snatched it while she and Alex were spending some time praying together.

So, we spent some time cancelling credit cards. And scouring back alleys, just in case. Then we continued with our regular activities: meeting with the students on project.

We went to dinner that night with Kirk, Jill and their little daughter. We had a good time and a good talk.

Overall, a pretty good day. And everyone was so impressed with the way Krista dealt with her bag being stolen. They said they would use her as an example when the next person's bag was stolen.
Posted by Matt Mikalatos at 5:15 PM