The Greek Passion (it's a novel, silly) 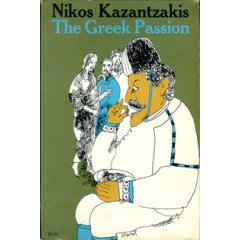 by Nikos Kazantzakis. I started it because I am planning to go to Greece this summer and thought, well, I should start to understand their mindset and culture by reading one of their novels. It was, honestly, a spectacular read. Here's a caveat before I go on to explain what I liked about the book: there is some pretty raw (though not explicit) sexuality in this book. It could (and probably will) bother you. It's mean to do that, it's not gratuitous, but it is potentially offensive. You are warned, friends.

Okay, scary warning out of the way, here's what I liked. This novel tells the story of a little Greek town under the Turkish occupation near the beginning of the 20th century. The town is planning for the passion play of the following year (a festival in which the entire week of Christ's passion is played out in real time by members of the village). They choose the players for Christ, the apostles and Judas and then the story begins as the members of the play begin to take on the characteristics of the people they are meant to portray in the passion play.

Here's what is amazing: this novel is really, truly, at-the-core about the Burning Hearts Revolution. Manolios, the shepherd chosen to play the role of Jesus becomes more and more Christ-like as the year advances and most of the action of the novel comes from this continuing transformation. We see people throughout the novel who are pagan (the Agha who rules the town), secularists having an outward form of Christianity (the village priest), some who are actually still worshipping Apollo and the Greek gods but using Christian names, and then those who, for the first time, are interacting with Christ and allowing him to transform them.

It's a fascinating story, and manages not to give all its surprises away until the last page. Nicely done, easy reading, at turns funny, moving and passionate.

As near as I can tell it's out of print. The link above will take you to Amazon where there's some used copies (as cheap as a dollar!). Let me know if you read it so I can call and just demolish you with questions about your thoughts on it.
Posted by Matt Mikalatos at 7:16 PM