Beauty and the Beast... ON ICE! 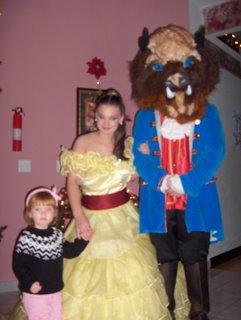 My parents took my kids to a castle last night where some local high schoolers dress up as characters from "Beauty and the Beast" (Disney edition) and take pictures with them and so on. Here are photos of my youngest getting up the guts to take a picture with Beast (Beauty had to encourage her that it was safe) and then a picture of what was repeatedly described to me by the children today... "Then we found some ice!" They love ice. 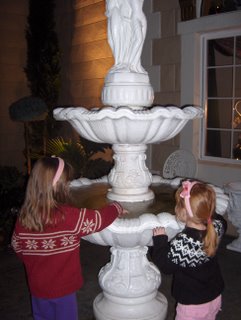 I told them before they left not to be afraid of the Beast, that he was only pretend. Z said, "I KNOW he is only pretend." A said, "First he was the beast but then he turned into... something ELSE! Ha ha ha ha ha ha haaaaaa!" I am not sure what that means but it is apparently very funny.

(Note: as I look at the Beast more closely I think I might have been afraid, too. He looks like an enormous dust mite with a blue jacket.)
Posted by Matt Mikalatos at 9:30 PM

Email ThisBlogThis!Share to TwitterShare to FacebookShare to Pinterest
Labels: A, Z