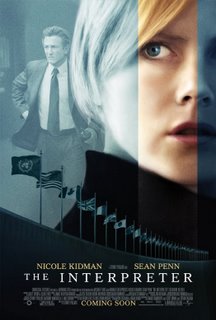 Krista, Dad and I watched "the Interpreter" tonight. Nicole Kidman, an interpreter for the UN, overhears an assassination plot. Sean Penn gets called in to protect the target as well as figure out if Kidman is nuts or on to something. Along the way the movie deals with themes of loss, grieving, genocide, revenge, love, heroism and how to transform our culture into something human... and does it all subtly, without getting preachy and while entertaining at the same time. Overall, I liked it quite a lot. It's rated PG-13 and passed the "three viewers" test: I liked it (which is pretty hard for a formula-plot film), Krista liked it (which is pretty hard for a thriller) and Dad liked it (which is pretty good for a movie that goes a little over two hours late at night). Three thumbs up from us.
Posted by Matt Mikalatos at 7:37 AM