Harry Potter and the Goblet of Fire 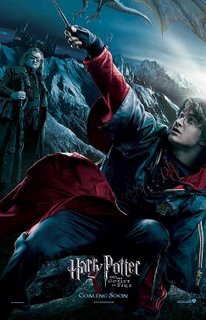 Our multi-million dollar realtor threw a big thank-you shin dig for all of his clients, and the core of the party was a showing of “Harry Potter and the Goblet of Fire” the day before it opened. The event itself was awesome… he gave us free popcorn, cookies, beverages and even those Harry Potter “every flavor beans”. There was even a really mediocre magician to attempt to entertain us with card tricks before the show.

As to the movie, let me just start out by saying that I’m not going to comment on the whole “Harry Potter: Good or Evil” debate in the Christian community. My guess is you’ve already made up your mind on that and don’t really care what I have to say about it. I will say that I thought the first couple of books were pretty good and the first couple of movies were pretty lousy, but that’s purely from an entertainment value perspective.

This movie is the best of the Harry Potter movies by far. I went in not caring if I saw it (in fact, was kind of bummed out that the free movie was one I didn’t care about seeing) but came out entertained. Mad-Eye Moody was funny and fun, worth a movie of his own. It was an enjoyable time. It ain’t for kids, though… it’s pretty scary, has some intense violence and cartoony evil magic. The scene where Harry has to fight a dragon was actually pretty cool. And they did a good job capturing the life and emotions of a young teenager (you know, if they were at magic school).

All that to say, if you’re a Potter fan, you’re going to enjoy the movie. If you’re where I was (low expectations and ambivalent about Potter) then you’ll probably like it, too. On the other hand, if you only have one fantasy-movie in you a year, you’re going to want to go to this one instead. I told Krista I’d rather watch the trailer to Narnia again than watch the Harry Potter movie again.

The best thing about the movie, though? Walking out of the theater to see the long line of kids waiting for the "first showing" at midnight. Ha ha ha! Take that, ya Harry Potter freaks!
Posted by Matt Mikalatos at 8:46 AM