The Tale of Desperaux -- Movie Review 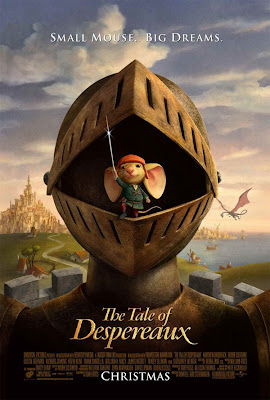 This last weekend we ended up being invited to a free preview screening of The Tale of Desperaux. Of course the kids were thrilled, so we trundled off to the theatre to see it. After a terrifying moment of perhaps not getting into the showing, we got the last two seats for the four of us.

The Tale of Desperaux is a computer animated adaptation of Kate DiCamillo's Newberry award winning novel of the same name.

It's the story of a young mouse who doesn't fit into mouse society because he wants to be a knight, not a cowardly rodent. He befriends and pledges allegiance to a human princess, and their fortunes are all mixed up with several rats, a castle maid, a chef, some sort of weird food genie, a dead queen and a mourning king.

As for the movie itself, I would say that (unlike many animated films) the best thing about it is probably the voice acting. Matthew Broderick, Sigourney Weaver and Dustin Hoffman all lend their voices, and all the performances of the actors are solid.

By far the worst thing about the movie to my mind was the ugly character designs. Even the characters that were supposed to be cute and charming were unattractive. And the ones meant to be ugly (like the leader of the rats) were so ugly as to be repulsive. Krista felt the same way, that the characters were a bit hard to look at. I think it may be that as CGI is advancing and characters look more lifelike, the exaggerations of certain cartoon styles begin to take on a sort of grotesque appearance. Maybe this is just us, though. The kids certainly didn't notice it.

I could have personaly done without the narrator, as well, who often distracted from the story by telling us the moral behind it by saying things about Forgiveness being the most powerful thing we can feel and so on. On the other hand, if you're going to have a didactic narrator, by all means, let's have Sigourney Weaver.

I actually liked a lot of the scene design... a lot of clever innovations in both the mouse and rat worlds (although my kids could have done without the skulls).

The movie was enjoyable, overall, and moved along nicely. It's not rip-snortingly funny or cute or adventurous. It watches a bit more like a fable... an entertaining story where every character seems to point us to a moral by the end.

At the end of it all, here's the most important thing. My kids loved it. Just adored it. They were thrilled to be there, loved watching it, and were bouncing around afterwards. So if you have kids and you're looking for a family movie, this is the one for you. And I can say without reservation that it was a million times better than that ridiculous trainwreck called WALL*E. Yes, feel free to send me your hate mail, but I was ready to send that little robot to the scrap heap. And my kids were bored in that movie. But they loved Desperaux.

Desperaux is rated G and releases this Friday, December 19th.

Posted by Matt Mikalatos at 9:43 PM