News From My Neighborhood

One Less Butterfly To Worry About. Z caught a caterpillar at my parent's house last week. I thought it had been released back into the wild, but today as Krista and I loaded up the van we found a furry little corpse in an empty yogurt cup. We gave it an uncerimonious burial in the front yard.

Houdini Dog Strikes Again. Certain Precautions I am taking have prevented Houdini Dog from getting into the backyard but yesterday I noticed that he has left a sign of his passing in the front lawn. I am thinking of putting up some "WANTED" posters, but since I don't know what he looks like I guess it would just say WANTED at the top and then there would be a blank space in the middle of the paper, and at the bottom it would say HOUDINI DOG. 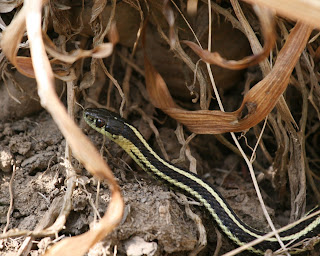 The Precaution Of Which I Spoke. I found a snake in our back yard. I assume that he is, perhaps, one of Houdini Dog's enemies, moving in to keep him out. I've warned the frogs, who now have a snake and Tiger Cat to worry about .
Posted by Matt Mikalatos at 8:50 PM