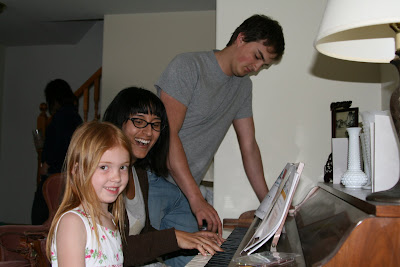 Here's Tifah, Reid and A playing piano yesterday. Reid tried to wander away after a while and A went to collect him again. She decided that they should have a band called, "Butterfly." Later we talked about making it two words, "Butter Fly."

Tifah made up a song for A about a girl named A who loved dancing and butterflies. Of course, A was in 7th heaven.

Z and A also decided to make a "kitty band" and pranced around the house singing in a meowing cat voice.

Posted by Matt Mikalatos at 8:34 PM