The Autumn Film LIVE IN CONCERT 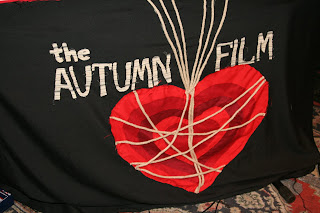 Last night we went to the Tonic Lounge in Portland to see the Autumn Film in concert. Here's the little banner that they hang on the front of Tifah's keyboard. I know you won't believe it, but she made this herself. It's true. 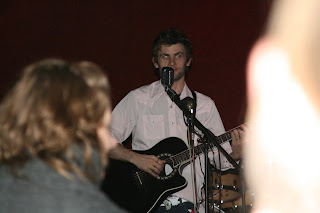 Here was the guy who played before them. His name is Levi Weaver. Apparently he recently opened for Imogen Heap, and the Autumn Film has actually seen him when they went to an Imogen Heap concert. The Film started geeking out when they saw they would be sharing a stage with Levi. He was great, actually. Solid, heartfelt lyrics and music that I'm not sure I know how to describe other than to say that I liked it a great deal. He played his guitar with a violin bow at times and various other things that have to be seen (and heard) to be understood. So if you get a chance to see him, be sure to swing by. 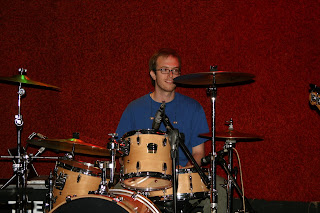 I took some pictures of the band when they were warming up. I am a lame picture taker. This is where you all are wishing that Krista had gone to the concert with me. Here's Dann smiling at his cymbals. 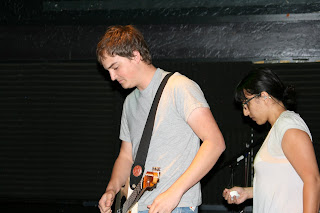 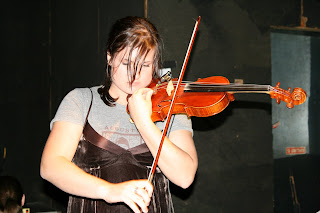 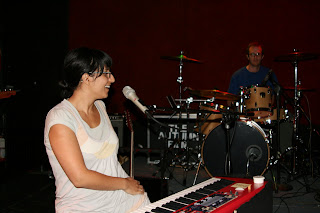 Tifah laughing at something funny her microphone said. 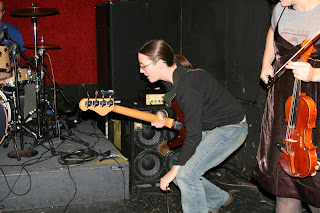 Juli getting "down" with her bass. 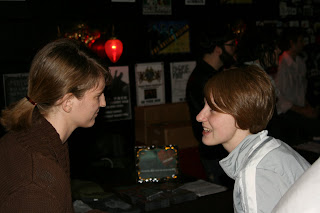 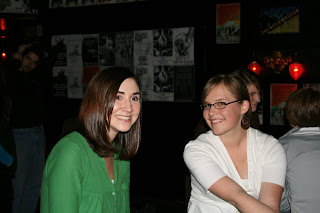 More fans you might know. I didn't get pictures of all the fans (like the Ryghs and my Very Own Parents and various others). This is because I am a lame picture taker. 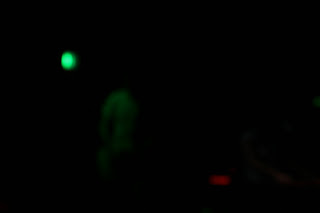 Further evidence that I am a lame picture taker. This is a picture of Reid jamming on his guitar.

The last band to play was Boom Snake. Unfortunately, Boom Snake got on stage pretty late so it was pretty much five fans, Levi and the Autumn Film. Which in a lot of ways was more fun, maybe. We had a conversation going between the audience and the band, which was fun.

Anyway, Dad and I helped load up the Film's stuff and then wished them farewell and off they went for their 20ish hour drive home (at last). The gang is possibly coming through again this summer. I hope you'll come hang out, I think you'll enjoy them.
Posted by Matt Mikalatos at 8:35 PM