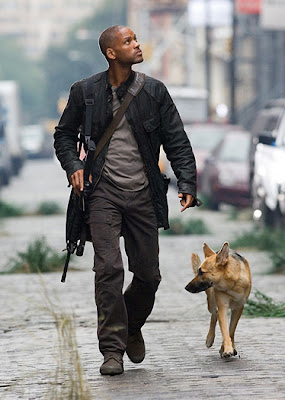 Who wouldn't like a movie about an apocalyptic destruction of human society where only one man is left to fight a horde of light-shunning zombie-vampire thingees? Um. Well. Okay, I can think of some potential pitfalls to making a movie like that. But it's either going to be great or unintentionally funny, right?

Tonight my Dad, Krista's Dad and I packed up into the van and went to see I Am Legend. Krista categorically assured me months ago that she wouldn't be joining me for a screening, which made me a little nervous. Reviews did not calm my fears. But I liked the original novel, I liked the strange but wonderful "Omega Man"... so I entered the theatre with trepidation.

And then... then... it was great. I really enjoyed it. For what it is, I mean, which is a thriller/horror film about the end of the world. The scenes of the destroyed NYC were great, the tension built nicely (in fact I won't need my nightly adrenaline shot tonight). Will Smith acted well, and the script neatly played out the effect of the main character being alone for the last three years.

As a pure popcorn movie I don't think there's anything in the theatre right now that can beat it. Others have said that they found parts of it boring, but I didn't experience that. As it progresses, the film explores themes of listening to God, redemption, transformation, becoming fully human, sacrifice, saviors and the viral power of love to "cure" human society, which gave it something to make it memorable once the lights came up.

I would happily give it a full recommendation if I didn't know that some of you would have nightmares for the rest of your life, wake up in the middle of the night screaming, "MIKALATOS! CURSE YOU AND YOUR MOVIE REVIEWS! AND A CURSE ALSO ON MUTATED ZOMBIE VAMPIRE THINGEES!" To be honest, I just can't abide to have any more curses on my head. So let me say this: if you can handle action films with some intense scenes, violence and blood, I think you'll like this film just fine. Otherwise STAY IN THE LIGHT! Don't enter dark buildings, especially movie theatres.

Rated PG-13 for "intense sequences of sci-fi action and violence," which is a silly way of saying it if you think about it. I mean, why all these descriptors of the violence? How many categories are we going to have? Fantasy violence? Mystery violence? Comic book violence? Why the genre categorization? Is it because most of the violence is perpetrated against barely human mutant critters? Remember, if there's one thing we've learned from the X-Men movies (and that's a big IF) it's that mutants are people, too.
Posted by Matt Mikalatos at 9:08 PM

Email ThisBlogThis!Share to TwitterShare to FacebookShare to Pinterest
Labels: i am legend, movie reviews, will smith