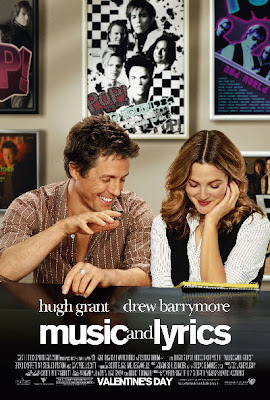 Krista and I rented Music and Lyrics last night. Or rather, I rented, we watched.

Do you remember the good old days, when British rock, synthesizers and pop ruled? Have you ever owned a "Wham!" album (or wished that you did)? Do you like jokes about Debbie Gibson and Tiffany? Then you will think this film is radical. :P

Krista and I both enjoyed this movie. Drew Barrymore was her usual self. And Hugh Grant was somehow, inexplicably, likeable and charming. How did that happen?

Hugh Grant plays the washed out former member of an eighties band. He can't write songs worth listening to anymore. He gets a chance to submit a song to a famous performer, but he has to write it within a week. He discovers that Drew Barrymore has a gift for lyrics, and soon they are chained to his piano, trying to put together a song that will reignite his career. Of course they will fall in love. Oops, spoiler. Sorry about that.

Krista compared this movie to eating candy. In other words, fun but with no nutrition. She meant it in a good way, though. We all like candy, right? It was a fun, goofy movie. It's not "Footloose" but hey, what movie is able to take on a comparison like that?

RATED PG-13 for sexual content. SPOILER: They have sex. Under the piano. That's right. Under the piano. But it's tamer than some television, folks. ANOTHER SPOILER AND A COMPLAINT: You know, I think that someone should get married at the end of a comedy. This is how we know it's a comedy. In fact, any single person in the movie should get married at the end. So we know everyone's happy. And if it's a tragedy, let's see some dead people. In fact, kill 'em all. Unless it would be more tragic to have someone left alive and feeling sad about all the dead people. That would be acceptable. All that to say, no one dead, no one married at the end of this thing. Is it a tragedy? A comedy? We are left to guess for ourselves.
Posted by Matt Mikalatos at 8:52 PM