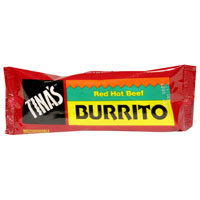 I worked quite a bit in the yard and garage today, and since the kids were out with their Grandparents and Krista was off exercising, it was time for every Matt to do what was right in his own eyes. Which means, "It's never too early for a Tina's Burrito." So at about ten a.m. I slapped a red hot beef burrito in the microwave, punched in 2:00 and went out to get a bit of work done for a few minutes to return to a perfectly cooked Tina's Burrito, the Friend of the Common Man.

I got caught up in my puttering, though, so I was gone a bit longer than two minutes. And when I came back in from the garage I was met by noxious yellow smoke billowing out of the microwave. The microwave was counting down still from 3:27, which I assume means that I had pressed 20:00 instead of 2:00 and had been cooking my burrito for nearly seventeen minutes.

I quickly turned off the microwave, opened the door, gagged on the putrid smoke, opened all the windows downstairs and set up fans to blow all the smoke outside. I had to go outside because I was choking on the nasty yellow cloud that had once been a tasty burrito. The house looked like it was exhaling after a nice, long drag on a cigarette.

My next thought, of course, was to get pictures for the blog, because you guys are my only friends. So, submitted for your approval, the still-smoking husk of my morning snack: 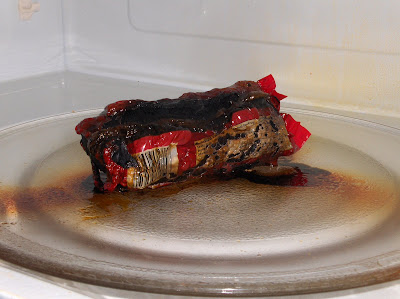 I picked up the burrito to do away with it and discovered it weighed about half an ounce (apparently I had inhaled the rest of the burrito). So I cut it open and got a look at the inside. It was basically a charcoal briquette. 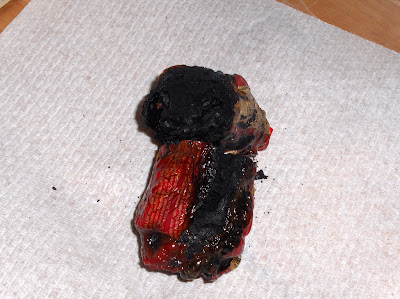 Which reminds me of a strange movie from my youth, and my favorite quote from said movie, "MOM! DAD! It's evil! Don't touch it!" That was a weird movie. It alters the way you look at severly burnt food. It was a fantasy, a dark comedy (I guess... I was like ten last time I saw it) with a tragic ending.

Unlike the Great Burrito fiasco of '07 which ended happily. Krista came home and laughed about the smoke which she could smell from the driveway. I hacked and coughed for a while but seem to have escaped any sort of poisoning.

And there was one more Tina's burrito in the freezer, which I ate as soon as I had cleaned out the microwave.
Posted by Matt Mikalatos at 6:48 PM